In response to the wildfires that plagued California over the past 2 years (which led to the bankruptcy filing of Pacific Gas and Electric [PG&E]), a series of proposed solutions are on the table. One such solution includes the intentional shut-downs of the power grid during times of high fire risk. Utilities and policymakers have yet to recognize a more logical solution: microgrids. As small islands of emergency power, microgrids survive power outages by disconnecting from the utility grid.

According to data submitted in utility wildfire mitigation plans, PG&E reported 414 ignition events between 2015 and 2017. Nearly 94% of these ignition events occurred on PG&E’s distribution infrastructure. These statistics underscore that California needs to modernize its overall grid network. Yet critical facilities, such as fire stations, water and wastewater districts, and emergency shelters, need something more than distribution system upgrades as the primary solutions. Upgrading the entire network may take decades, which costs ratepayers in the form of much higher power bills.

Over half of California ratepayers live or work in high threat fire districts. One could argue the most cost-effective approach for communities today would be to use existing onsite solar systems and existing backup generators, and to create microgrids at critical facility sites. The difficulty with this approach is that California’s local governments are often fiscally challenged. Luckily, new creative financing solutions are emerging that can transform these challenges into opportunities.

Case in point: Montgomery County, Maryland. In 2012, over 250,000 Montgomery County residents and 71 county facilities were without power for multiple days due to a severe storm. Coupled with aging infrastructure (some of which dates back half a century), this storm had Montgomery County looking at its options for upgrades that could bolster resilience considering the increase in extreme weather events. The county was also looking to reduce all carbon emissions contributing to global climate change by 2035. In 2017, it moved forward with two microgrids (7.6 MW total capacity) which required zero capital expense.

Proceeding without capital expense was possible because the county worked with Schneider Electric; Schneider Electric provided the automation and controls to manage distributed energy resources that included solar PV, combined heat and power, and backup diesel generators. Known as energy as a service, this new business model has been deployed at 81% of all microgrids around the world. In the case of Montgomery County, the investor was a subsidiary of the utility Duke Energy.

California Needs to Modernize via Microgrids

Though California is the national leader in developing municipal microgrids, the state’s carbon reduction mandates and new 100% clean energy goals point to the need for a greater reliance upon resilient microgrids to serve critical facilities. If California does not modernize its power delivery infrastructure via microgrids, the state will be thwarted in its efforts to meet not only its economic and public safety needs, but its carbon reduction and renewable energy goals. 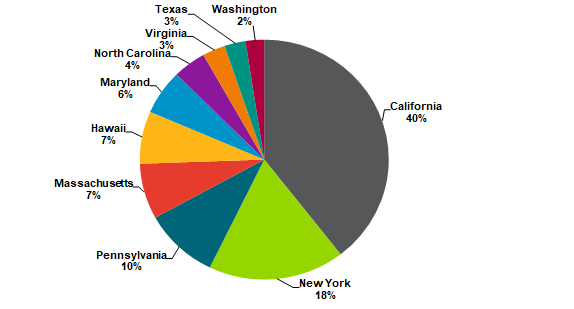 At present, California features 338 water districts and 275 fire protection districts (along with 91 sanitation and 79 hospital districts). While many of these facilities have backup fossil fuel generators, extended preventative grid shut-downs could stretch fuel supplies dangerously thin. Furthermore, California’s clean energy goals dictate that state consumers rely upon carbon-based resources less—not more. The beauty of a microgrid is that it can incorporate existing generators and solar PV as well as integrate batteries and other resources, like EVs. Now that there is a proven business model to finance such critical facility microgrids, what is California waiting for?

California Wildfires Are a Call for Corporate Attention to Adaptation

California Wildfires Are a Call for Corporate Attention to Adaptation