Onshore wind is a big business. In 2019, approximately 53.4 GW was installed onshore compared to 6.1 GW installed offshore (or about 10% market share). However, offshore is growing much faster than onshore wind. Onshore wind is expected to grow modestly at a compound annual growth rate of less than 2% over the next 10 years. Offshore wind is expected to grow at 15% and bring its annual market share up to 20% by 2029, according to Guidehouse Insights. There is a lot of interest from developers, investors, supply chain, and other stakeholders to identify where new offshore wind markets can open up next.

While onshore wind is feasible in almost every country, offshore wind requires a narrower set of criteria to take off. Generally, this includes large population centers adjacent to an ocean with higher than average wind speeds, and subsea geography that is not too deep. Floating foundations are expected to open up deepwater areas, but that’s another topic. Lastly, there needs to be a marketplace or government that provides a range of incentives, regulations, and other conditions to attract investors. Select countries in Europe have long had the right set of conditions to support a vibrant offshore wind market, including the UK, Germany, Denmark, Belgium, and the Netherlands. In Asia, the countries include China, Taiwan, and Japan (and South Korea to a lesser degree). The US is finally taking off as well, led by multiple projects including a massive 2.6 GW project off the coast of Virginia.

Norway Is Likely the Next Large Offshore Market

As wind turbines get more efficient through impressive size scaling, more markets are expected to slowly open to offshore wind. The country with the right ingredients to be the next large offshore wind market is Norway, following the announcement it would auction off two offshore wind development zones in Norway’s North Sea that could support around 4.5 GW of capacity.

Norway plans to tender two areas—Utsira Nord and Sørlige Nordsjø II—beginning on January 1, 2021. The plan remains in early phases and exact details of all regulations have not been finalized. It is expected to follow similar structures to those in other European countries where experienced bidders offering the most competitive offtake electricity price are awarded the capacity. The smaller 1,010 km² (627 m²) Utsira Nord site is designed for commercial scale and as a possible test phase area for floating offshore wind turbines. The larger 2,591 km² (1,609 m²) Sørlige Nordsjø II site is planned for traditional fixed bottom foundation commercial scale wind.

Other offshore activity is occurring besides the two new sites. In April, Norway approved a project by Equinor and its partners to build a floating 88 MW offshore wind farm to supply electricity to several oil & gas (O&G) platforms from the end of 2022. It could help to reduce carbon dioxide emissions by up to 200,000 tons per year by replacing electricity generated by gas power turbines, Equinor says. 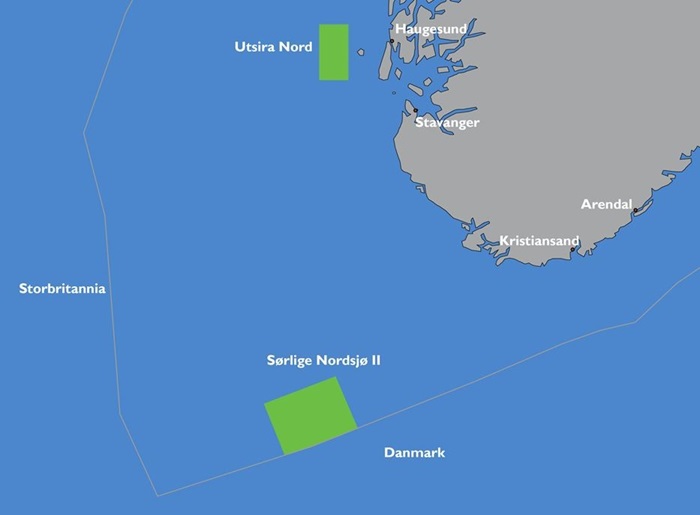 It is almost surprising that Norway wasn't already an established offshore wind market. It has a coastal population center adjacent to the same windy North Sea where the majority of Danish and German wind farms are already built. Norway also has established maritime industries and Europe’s largest offshore O&G industry, which provides expertise and vessel capacity complementary to offshore wind.

With Norway's government backing offshore wind and offering up two large development areas (with policies soon to follow), this new offshore wind market is set to take off.

By Huygen van Steen
Back to Top
Press enter to search