The update offers the market an authoritative source for the status of offshore wind in the Netherlands. This blog summarizes some key points of the 20-page market assessment and emphasizes why there is so much interest in the Dutch offshore wind market.

The new offshore wind energy roadmap 2030 outlines nine development zones, of which five have been tendered and are under various stages of development, which is progressing as planned. The first new projects are scheduled to come online in 2020 (Borssele I-IV, totaling 1,483.5 MW) and 2022 (Hollandse Kust Zuid I-IV, totaling 1,500 MW), followed by continuous steady capacity increases until 2030.

Dutch-based companies Nuon, Shell, and Eneco led the early rounds of offshore wind development in the Netherlands. They are followed by international developers Northland Power, Ørsted, and Vattenfall, which have since entered the market. Dutch companies aim to stay competitive through vertical cooperation (i.e., partnership between developers and supply chain companies).

The Dutch offshore wind program uses a floating feed-in-premium scheme under the Netherlands Stimulation of Sustainable Energy Production (SDE+) tender and subsidy legislation. Successful companies with the lowest bid price that meet all the specified requirements win a 15-year subsidy grant and a 30-year permit to build, operate, and decommission the wind farm.

While the first two price decreases are notable, even more notable was the next two tenders that were won at zero subsidy. The first two subsidy-free concessions were awarded to Vattenfall in 2018 (Hollandse Kust Zuid I and II) and 2019 (Hollandse Kust Zuid III and IV). These zero-subsidy bids were evaluated based on their qualitative merits regarding identification and mitigation of revenue, construction, and operational risks. 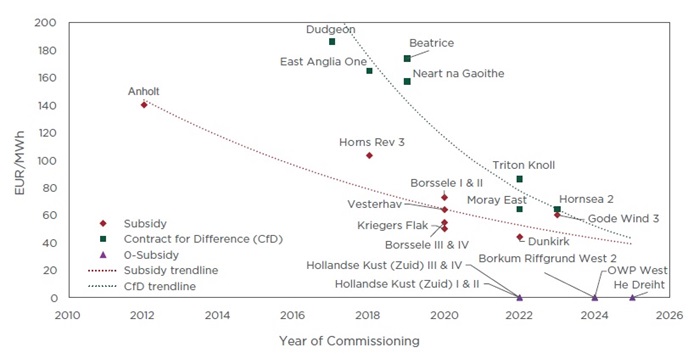 The first ever zero-subsidy wind farm commissioning is planned in the Netherlands at the Hollandse Kust Zuid sites in 2022. Concurrently, Germany has held subsidy-free tenders and awarded the first project to be commissioned in 2024.

The chart above highlights recent pricing in various recent offshore wind tenders and the decreases are unmistakable. However, it should be noted that there is no 1:1 relation between the tender prices and levelized cost of electricity from actual projects. It is not possible to determine the cost level for zero-subsidy projects, as this is only known to the developer. The projects have therefore been included at €0/MWh (the subsidy level, not the actual cost level).

By Huygen van Steen
Back to Top
Press enter to search