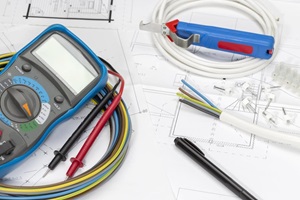 A common misconception around the rise of distributed energy resources (DER) and the Energy Cloud is that investment and innovation in the power sector is focused almost exclusively across the grid edge. While the grid’s center of gravity is shifting downstream, utility-scale generation and bulk transmission remain a key buttress for the grid in the midst of a historic transformation.

The global high voltage transmission network connecting centralized generation sources to the distribution grid is estimated to stretch across 3.5 million km. To put this in context, there is enough high voltage infrastructure deployed globally to wrap around the earth 75 times. Although already extensive, the International Energy Agency (IEA) estimates that an additional $7.2 trillion investment is needed for transmission and distribution (T&D) grids through 2030—40% of which is just to replace existing infrastructure.

High voltage direct current (HVDC) transmission lines, which function as arteries that move large amounts of electricity above and separate from the existing alternating current (AC) grid, are a key focus of this investment. Currently, there is more than 200 GW of HVDC capacity deployed globally.

According to Guidehouse Insights’ Supergrids report, global investment in HVDC infrastructure is expected to increase from $8.3 billion annually in 2016 to $10.2 billion by the end of 2025. An estimated 65 supergrid projects heavily leveraging HVDC are in development or planned around the world. One such project, dubbed the Asia Super Grid, was born out of a memorandum of understanding among Japan, China, South Korea, and Russia in 2011.

Why So Much Fuss Over Expensive Hardware?

Since large-scale renewable energy projects tend to be built in remote areas where resource anomalies exist (such as wind in remote plains, solar in desert regions with high insolation, and geothermal power tapping underground steam located near centers of volcanic activity), bulk transmission is necessary to deliver generated electricity to large population centers, sometimes located thousands of miles away. The largest pools of renewable energy tend to be the farthest from human population centers; supergrids connect these areas of high supply to areas of high demand.

As discussed in the Navigating the Energy Transformation white paper, the emergence of the Energy Cloud will mean an expansion of traditional grid boundaries to integrate local networks of DER—microgrids, virtual power plants (VPPs), and others—as well as expand internationally to tap far-flung pools of renewable resources.

The Expansion of Traditional Grid Boundaries in the Energy Cloud 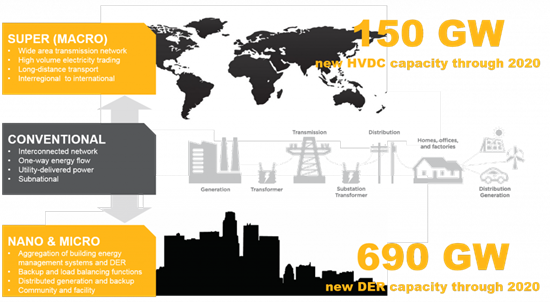 China is currently the world leader in the development and deployment of HVDC infrastructure. This is partly out of necessity; not only is China playing catchup with domestic demand for electricity, but the majority of its population of 1.3 billion lives in the east of the country, 2,000 km or more from its most concentrated energy resources. According to an Economist analysis, three-quarters of China’s coal is in the far north and northwest of the country, for example. Meanwhile, four-fifths of its hydroelectric power is in the southwest.

China’s state-owned utility, State Grid, is halfway through its 10-year plan to spend $88 billion on HVDC lines between 2009 and 2020. As investments continue, we expect the prospect of a global grid to come more sharply into focus—though obstacles related to cost, standards harmonization, consensus around rules of free trade of electricity, and geopolitical hurdles will first need to be more firmly settled.

By Jessica Lewis
Back to Top
Press enter to search