In the past, government support for microgrids has been fragmented, often hodge-podge collections of regulations, standards, and public policy. With the extreme weather events hitting the US over the past 8 years, states—as well as Puerto Rico—have enacted new programs designed to bolster grid resilience through microgrids. What can the world market learn from these public policy experiments?

Puerto Rico as a Case Study

Let’s zero in on Puerto Rico, which has suffered more severe power outages than any other part of the US, with the average citizen going 84 days without electricity following Hurricane Maria in September 2017. Though California led the US with the number of power outages annually over the last decade, Hurricane Maria brought nationwide attention to the shortfalls of grid infrastructure in Puerto Rico, a US territory.

In 2017 the US equaled the highest number (16) of billion-dollar disasters ever in one year (tied with 2011). The cumulative damage of these events was $306.2 billion, shattering the previous US annual record of $214.8 billion experienced in 2005 (see figure below).

Billion-Dollar Disasters in the US: 2017 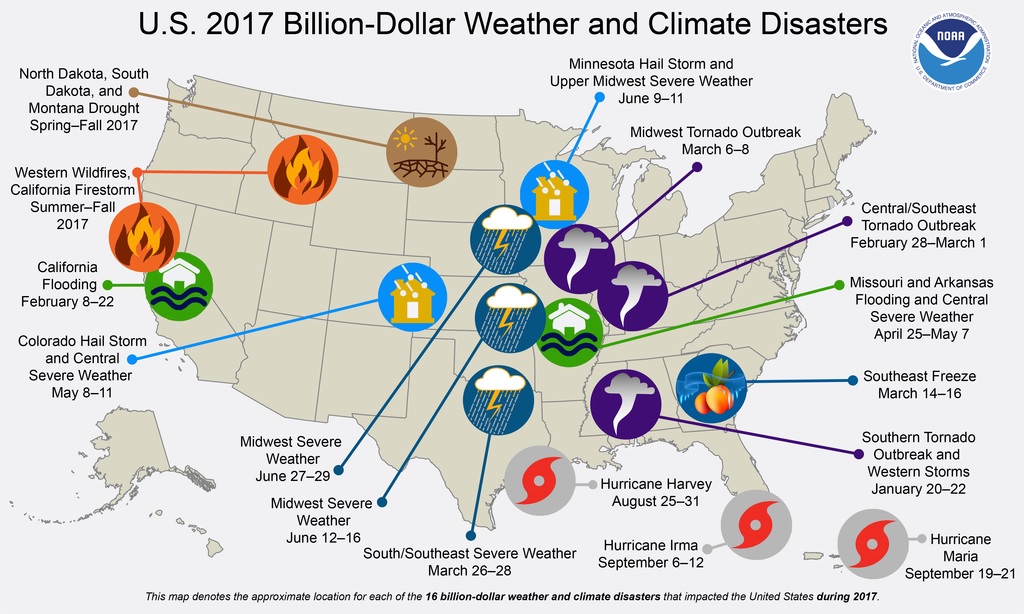 With crisis comes opportunity. For many, Puerto Rico is a test case to validate the notion that the future of the grid (as we move forward with the vision of an Energy Cloud) can revolve around microgrids incorporating renewable energy. Consider the recently released Integrated Resource Plan in Puerto Rico, where Siemens (and the Puerto Rico Electric Power Authority) proposed that the island be sectionalized into eight minigrids. These eight islandable minigrids would be further subdivided into smaller microgrids designed to deliver increased resiliency to critical infrastructure facilities and communities.

Perhaps the most far-reaching of proposed reforms for Puerto Rico is the planned privatization of the island’s power supply. According to PowerGen Renewable Energy, private sector remote microgrids typically cost half as much as similar systems developed by governmental agencies and nationalized utilities. If Puerto Rico continues down the privatization path, its success (or failure) will carry broad lessons throughout the globe, and just may be a benchmark for a modern, more resilient, sustainable, and reliable power system for both island and mainland communities.

While the debate over larger infrastructure upgrades to enhance resiliency in Puerto Rico continues, smaller vendors—such as Blue Planet Energy, which is deploying a number of its non-toxic Blue Ion lithium ion batteries in smaller microgrids—are validating many use cases with broad application across the globe. For example, the company installed a microgrid at a cancer center on the island of Vieques, which suffers from severe toxic contamination due to decades of military bombing, resulting in a cancer rate 27% higher than the rest of Puerto Rico. With the help of the advanced Blue Ion batteries, the facility has become a resiliency hub for the community.

Blue Planet Energy, presenting at the Microgrid Innovation Forum on March 19 in Washington, DC, has also installed solar plus battery microgrids at numerous remote water-pumping facilities with non-profit partner Water Mission. Of such projects, four are supplying 1,200 people with clean water, a necessity to sustain life in areas the public utility decided not to restore electrical service. Extended power outages threaten clean water supplies in many parts of Puerto Rico, as well as other remote locations worldwide.

Grid-Integrated Buildings Are Good for Business and the Climate

Grid-Integrated Buildings Are Good for Business and the Climate

By Ricardo Rodriguez
Back to Top
Press enter to search