In the US, the Federal Aviation Administration (FAA) closely governs the deployment of drones for commercial purposes, limiting the potential benefits gained within and beyond visual line of sight (BVLOS) and by autonomous drone flight. In September 2018, Xcel Energy was granted permission to launch the first BVLOS drone flight by a US utility for ongoing inspections. According to a CBS Denver Report, Xcel believes its drone program will cost approximately $200-$300 per mile, compared with up to $1,600 per mile for the cost of a helicopter for comprehensive visual inspection. As of the time of writing, Xcel is the only US utility to gain authorization from the FAA for an operational, non-pilot BVLOS program.

However, internationally (particularly in Europe and the Asia Pacific regions), recent utility drone activity within visual line of sight and BVLOS has picked up significantly over the past year. Major initiatives and new drone technology are growing the market for drones for utility asset inspection. A full analysis of the benefits of drones for utilities and the global forecast through 2026 can be found in Guidehouse Insights' report, Drones and Robotics for Transmission and Distribution Operations. The figure below shows the projected annual global revenue for drones and robotics for utility operations. Notably, the forecast begins to grow exponentially in the early 2020s, especially in the Asia Pacific region, as regulations around the world are expected to be relaxed.

Annual Drones and Robotics for Transmission and Distribution Revenue by Region, World Markets: 2017-2026 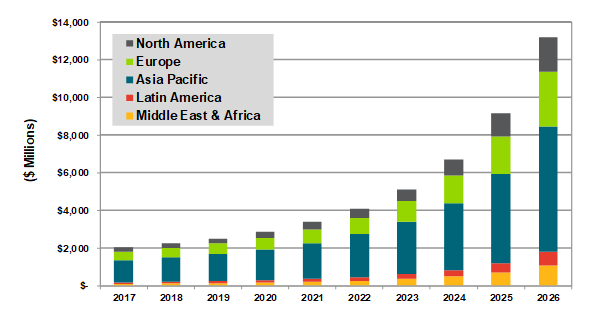 Terra Drone Indonesia, a segment of Japan-based Terra Drone Corporation, announced in April 2019 that it has successfully and effectively monitored and mapped transmission lines in Indonesia. In just 10 minutes, the fixed wing Terra Wing drone was able to monitor and map 2 km (1.24 miles) of transmission lines and four transmission towers. Together with Terra Drone’s in-house software, the data is analyzed and a 3D model is produced. The figure below is an image produced by the platform, highlighting the areas of vegetation growth within a potentially unsafe distance of the power lines. 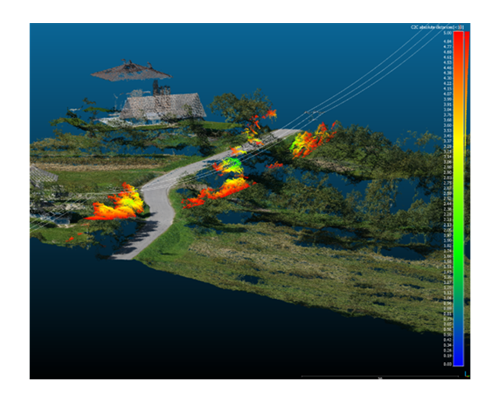 In January 2019, Israel-based automated drone company Airobotics was granted the first (and only) approval by the Civil Aviation Safety Authority to operate multi-rotor, automated drones BVLOS with no aircrew needed. The automated platform by Airobotics is pilotless and completely automates the inspection process with on-demand, pre-programmed flight paths supported with payload dropoff and battery exchange modules in the field. Airobotics offers its solution to utilities for gas and electric infrastructure inspections where regulations allow.

On March 10, 2019, Doosan Mobility Innovation, a subsidiary of Seoul-based Doosan Group, signed a memorandum of understanding (MOU) with the Korean Electric Power Corporation (Kepco) and Daejeon Electric Power Research Institute. The MOU was for the continued development of hydrogen fuel cell-powered drones for long distance transmission line inspection. Doosan’s fuel cell drones can fly for up to 110 minutes, compared to the 10- to 30-minute flight time of many battery-powered drones equipped with cameras and sensors. These drones, powered by Doosan’s DP20 powerpacks, are to be controlled with a Kepco-developed communications and control platform and guided BVLOS along pre-programmed flight paths to inspect and monitor long distance transmission lines. Official pilot program details have not been announced, but Doosan has indicated that test flights are ongoing and that the service is anticipated to become available to utilities worldwide in late 2019.