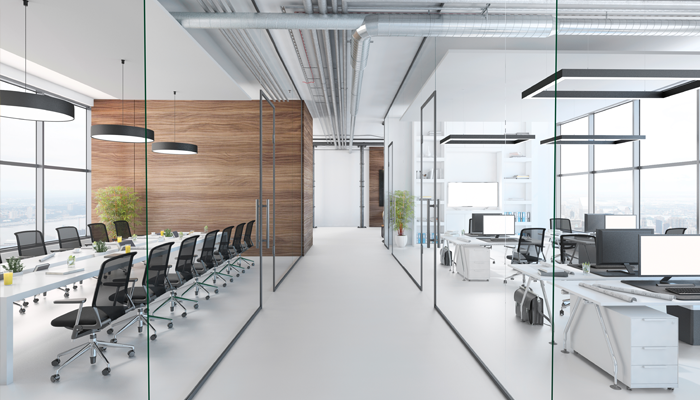 Getting back to work in offices post COVID-19 has challenged nearly everyone involved in the commercial buildings sector. One office in Chicago shines a light on a pathway ahead. Fulton East is a 12-story, 90,000 square foot office and retail structure that opened in summer 2020. It is among one of the first buildings in the US designed specifically for a post COVID-19 world.

Fulton East was built with several pandemic-driven aspects top of mind: maximum social distancing, touch-free operations, and air and surface sanitization, according to a recent post on Construction Dive. The developer was Parkside Realty, and its CEO, Bob Winslow, expects a shift away from traditional buildings where numerous tenants share common corridors, bathrooms, and public spaces. Instead, offices are likely to borrow from Fulton East’s design, which was engineered with just three columns, enabling a flexible office design that supports social distancing guidelines with separate café and kitchen areas.

Also of note for Fulton East is the use of MAD Elevator’s Toe-To-Go technology, which allows users to call for a car by toe-tapping wall-mounted buttons located next to elevator doors.

Workers’ Views on the Workplace Are Changing

This new era of how we use office space coincides with how workers are revising their views about work habits. A majority of knowledge workers (72%) said that they would rather forget the old way of going to the office every day for a hybrid approach of remote work and occasional in-office activity, according to a Slack-sponsored survey. Only 12% of the respondents said that they want to return to full-time office work.

These views cannot be ignored. People have gotten a big dose of work-from-home or work-from-anywhere, and they do not want to go back to the old ways. “What we can say with certainty is that the sudden shift to distributed work has provided a once-in-a-generation opportunity to reimagine everything about how we do our jobs and how we run our companies,” said Slack CEO Stewart Butterfield in a BBC interview.

The Part-Time Office May Become the Norm

So it would seem that we are moving swiftly to the part-time office. Companies such as Dropbox, WeWork, and Google are on board. Dropbox, for instance, said in fall 2020 that it would become a virtual-first operation for the foreseeable future. Dropbox is not abandoning its office space—rather its default is remote work, with in-person work as an option for collaboration. The company has a bit of a wrinkle on the hybrid approach, setting up Dropbox Studios, which are offices reserved for the explicit purposes of team building and community gatherings.

As COVID-19 vaccinations slowly increase and fears subside, offices will likely reopen in new ways. A few may look like Fulton East. But many more will likely adopt the flexible approach of Dropbox and Google, which plans to delay reopening its offices until September 2021 and is asking employees to come in 3 days a week. We are in a new era for offices where flexible is the byword. You best get used to it.