The Auto Industry May Be Facing a Dose of Electrification Reality

Most of the world’s major automakers are rushing headlong to develop EVs. Tens of billions of dollars are being invested to advance the technology and retool manufacturing. While governments in many regions are pushing electrification, consumer demand remains a problem and some adoption forecasts remain wildly optimistic.

During the recent UBS Global Industrials and Transportation conference in New York, I participated in a panel titled “Will the Future Car be Electric” and General Motors president Mark Reuss delivered the keynote address. At the EcoMotion conference in Israel, former Ford CEO Mark Fields discussed electrification and its prospects in less than glowing terms.

When Will Electrification Take Off?

It’s not that anyone doesn’t believe electrification is going to be the future of transportation propulsion, the big question is timeframe. In 2018, battery EVs (BEVs) only accounted for 1.4% of global EV sales and Guidehouse Insights’ latest Market Data: EV Market Forecast report projects that number to grow to 15.4% by 2030. Guidehouse Insights’ projections may seem conservative to many, but the firm has a 10-year track record matching remarkably well with how the segment has developed. 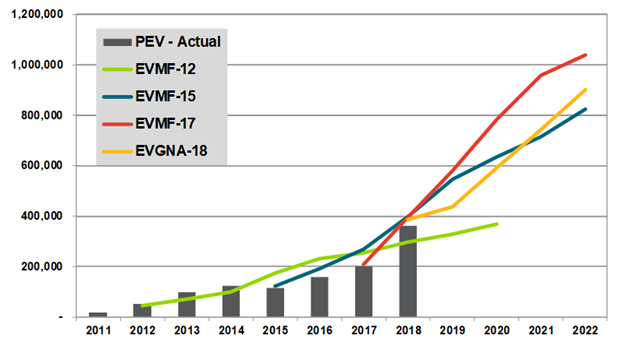 Fields, now senior advisor at global asset management firm TPG, initiated a $4.5 billion investment in electrification while still at Ford. Under his successor, Jim Hackett, Ford has more than doubled that investment to $11 billion. While Fields still supports electrification and believes it will grow, he also believes the industry is in for a reckoning in the near term with too much being spent on too small a market. Some parts of the industry are recognizing this challenge and positioning their businesses to survive this period.

GM Prepares for Electrification Through Trucks and SUVs

Reuss laid out five things that GM is doing to prepare itself for the future. Electrification and automation were fourth and fifth on that list, not because of their importance, but because other items must come first to enable the transition. The first thing Reuss brought up was trucks and the need to sell many of them. Trucks and SUVs are segments of the market that are still growing fastest as traditional car sales decline. Trucks and SUVs are also the most profitable segments, with margins crucial to funding the development of next-generation technologies.

While battery costs are declining and the cost of making internal combustion engines meet tighter emissions standards is climbing, for now, BEVs remain economically challenging for mainstream customers to purchase. Unlike Tesla, which seems to be able to continue tapping capital markets to fund growth as it continues to burn cash, GM and others must self-fund these developments.

Hackett has also slashed cars from the Ford lineup and replaced them with more popular and profitable utility vehicles. Ford has split into two main business units, with Joe Hinrichs running the legacy businesses and Jim Farley taking responsibility for the mobility side (with EVs and automated vehicles that most see as the future of the industry). Hinrichs’ side of the company is generating the cash to fund Farley’s side.

Forcing Supply Is Not Enough

This situation, however, likely won’t be enough. Automakers and suppliers continue to form partnerships to share these enormous costs: Ford is talking to Volkswagen, BMW and Jaguar Land Rover are teaming up, and Fiat Chrysler is attempting to merge with Renault. More consolidation is likely as everyone faces the harsh reality of the future. We need cheaper BEVs, more charging for those that don't have access to home charging, and higher gas prices in order to spur demand; simply forcing supply is not enough.

By Sam Abuelsamid
Industry Insight May 22, 2019

By Sam Abuelsamid
Industry Insight May 22, 2019