Just as anything in excess can negatively impact, artificial lighting can also be harmful if unwanted, inadequate, or excessive. Light pollution refers to poorly implemented or excessive amounts of lighting and is a societal issue. Inadequately applied artificial light at night (ALAN) is also a recognized threat to biodiversity and ecosystem processes, recently proposed as a driver of insect declines.

The British Parliament’s recent formation of the All-Party Parliamentary Group for Dark Skies (APPG) dedicated to reducing light pollution shows its concerns on light pollution in Europe. APPG plans to protect the UK’s dark skies and nighttime landscape and was inspired by other national laws such as those in France and South Korea.

Light pollution has been a growing issue for some time. The Czech Republic introduced light pollution prohibition laws in 2002; many other countries have implemented similar regulations. The increasing number of complaints about light pollution in South Korea shows that this issue has become an increasingly serious concern in recent years, as the following figure shows. Seoul suffers the most from light pollution, and annual complaints have increased due to excessive light emissions (e.g., neon-sign advertisements). 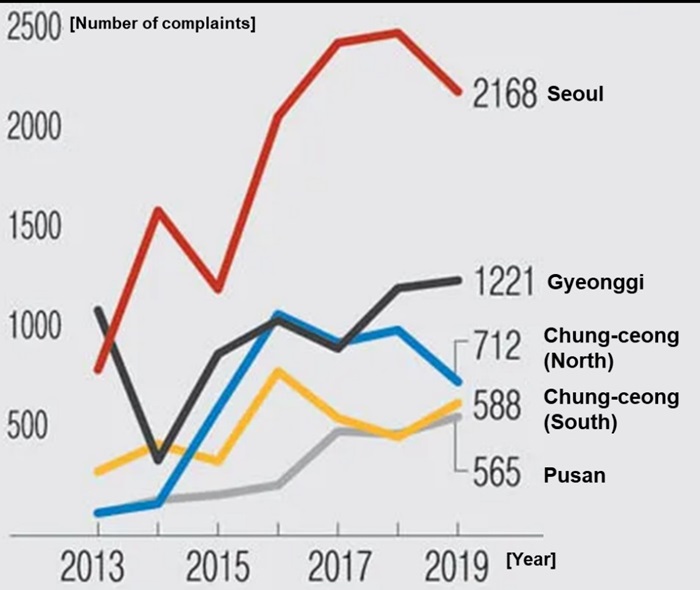 Organizations around the world are working to combat light pollution. The International Dark-Sky Association (IDA) is a US-based nonprofit with the mission of preserving and protecting the night environment from light pollution. In Japan, the village of Kozushima, which is part of the Izu island located 180 km south of Tokyo, and Iriomote-Ishigaki National Park in Okinawa Prefecture in southwestern Japan were certified as an international dark sky park by IDA. The certification aims to encourage communities, parks, and protected areas globally to protect the distinguished quality of starry nights and a nocturnal environment through responsible lighting polices and public education.

Is It Time to Rethink Quality in Lighting?

Is It Time to Rethink Quality in Lighting?

By Wendy Davis
Back to Top
Press enter to search