The new Denny Substation is the first substation constructed by Seattle City Light in more than 30 years. Especially in North America, the construction of any new substation in a dense urban area is rare, but this is no ordinary substation. Equipped with features including an artificial-turf dog park, 44,000 square feet of open space, a quarter-mile elevated walkway, and both temporary and permanent art installations, this substation will be the first of its kind anywhere in the world. Additionally, the substation will be outfitted with solar panels and a heat recovery system to sustainably power the facilities within.

The Denny Substation represents a pivotal transformation in the development of the electric grid in urban areas around the world. Loads are increasingly dense, and distributed generation is limited in populated urban areas. These changes will eventually require major upgrades to critical electricity delivery infrastructure in major urban areas. A densely populated urban area is typically an old one—which means aging grid infrastructure—and is likely not intended to and is barely able to support the load on its grid today. New substations will need to be integrated into urban areas, and existing infrastructure will likely need reinforcement. Expect other cities to follow Denny’s lead. The nearly $300 million substation and networks will provide reliable, stable power through underground transmission and distribution networks to the blossoming South Lake Union area, which is home to companies such as Amazon, Facebook, and Google. The substation will also provide backup power to the existing and aging downtown Seattle network and ease congestion across the system. Construction of the substation began nearly 3 years ago; the station began delivering power in July 2019 as the networks themselves were completed and business tapped in.

As nice as it is to have a substation with a dog park and elevated pedestrian track, this substation’s electrical components are critical to Seattle’s electric infrastructure and it houses seven bays of gas insulated switchgear (GIS) and four power transformers. The GIS system is key to the substation’s design as it takes up less room than traditional air-insulated switchgear, is housed inside closed buildings, and allows for a near-completely underground network of wires, pipes, and cables. This increases the safety of the substation, which is paramount given its location and the amenities it provides. 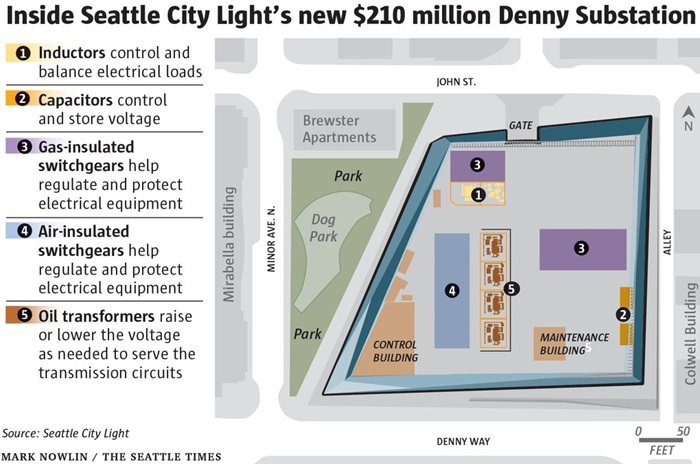 Seattle may be the only city to boast a substation like Denny, but urban substations will play an important role in the transformation of the electric grid throughout much of the developed world. Substations such as Denny will help cities navigate these issues while creating a positive and sustainable contribution to the community.