Power outages are happening more frequently than ever. They are also becoming more expensive for customers and utilities. These realities have contributed to the growth of technologies and utility programs designed to increase grid uptime and reduce outages. Specifically, utilities are homing in on ways to improve grid performance by focusing on two major grid characteristics:

Reliability and resiliency are critical grid characteristics, and the Institute for Electrical and Electronics Engineers has established reliability standards for measuring performance in both. The most commonly measured metrics for grid performance are defined by the California Public Utilities Commission (CPUC) as follows:

As customers increase their demand for reduced outages, a shift to performance-based ratemaking (PBR) may motivate utilities to further increase spending on reliability and resiliency. PBR rewards utilities for strong performance in the CPUC metrics (among others) and penalizes them for higher outage statistics. While it is not a frequently used ratemaking strategy currently, more and more PUCs are considering or accepting utility proposals to make the transition to PBR.

With PBR gaining some traction around the US, utilities are more motivated than ever to modernize their grids and improve performance. Global and regional markets for products like smart sensors, distribution automation equipment, and grid analytics are experiencing significant growth. Guidehouse Insights’ T&D Sensing and Measurement Market Overview and Market Data: Smart Grid IT Systems reports further analyze the market, discussing drivers, barriers, trends, and market sizes for such investments.

Outages by the Numbers

Despite utility investments into the extension of enhanced grid visibility out onto the distribution network and the automating of transmission and distribution equipment, power outages are increasing in both number and cost. Eaton’s 2017 Blackout Tracker reports that in 2009 there were an estimated 2,840 outage events, affecting more than 13 million people. Fast-forward to 2017, and Eaton estimates that nearly 37 million people were affected 3,526 outage events. This problem is compounded by the increasing costs of power outages, particularly in the commercial and industrial customer class. For example, a 2016 Ponemon Institute study estimated that the cost per minute of a power outage at a US data center has increased tom $5,617 in 2010 to $8,851. Additionally, S&C’s 2018 State of Commercial & Industrial Power Reliability report found that 18% of companies experienced a loss of more than $100,000 as a result of their worst outage. The same report found that 50% of customers experienced outages that lasted more than 1 hour in the past year, and that 25% of companies experienced power outages at least once per month. 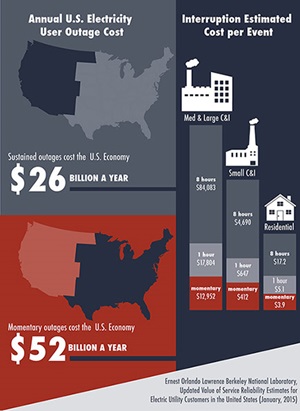 Outage statistics like these are becoming less and less acceptable to utility customers, and are driving utilities and their regulators to allocate significant resources toward improving grid performance. Many grid modernization plans of the past were focused on grid protection and control, but utilities today are focused on improving reliability and resiliency.