Oil prices are on the rise. Unlike in the past, diesel-consuming end users have a growing range of options to limit the pain. Advances in generator and microgrid controls, along with continued cost declines in distributed renewables, are among the disruptive factors at play.

US benchmark WTI Crude oil is recently trading above $65 per barrel, more than twice its 2016 low. Surveyed analysts have increased their short-term forecasts for 10 consecutive months, and generally expect continued cost increases for at least the coming year.

What Have High Prices Meant in the Past?

In the past, due to a lack of alternatives, high oil prices meant those reliant on diesel generators simply had higher electricity costs. These diesel-dependent parties include mining and oil & gas producers, remote developing world electrified communities, and even entire islands like Hawaii. One important exception to this rule is the dual-fuel genset craze of 2013-2014, where thousands of new and retrofitted diesel gensets were added in natural gas feeds to displace diesel, thereby exploiting the roughly 4:1 price difference between the fuels. The chart below shows 2014 prices of about $16/MMBtu for crude versus $4/MMBtu for gas; in this case, crude prices are a rough proxy for diesel. The 2018 chart could perhaps point to a similar trend, not least because associated gas is helping depress natural gas prices in parts of North America. 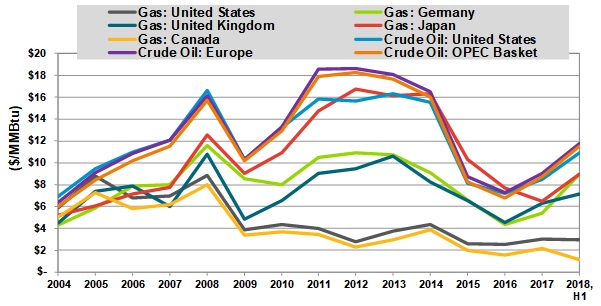 What Does the Future Hold?

If that last episode of diesel displacement was driven by a mix of both tech and economics, the next one will be too, albeit with ever more cheap and renewable DER into the mix. Dual fuel gensets are poised for a comeback if gas stays cheap, but solar PV, wind, and other DER are also primed for increasing integration into diesel-based microgrids. Each of these technologies can generate electricity at costs well below that of diesel, which can range from $0.20/kWh to $0.50/kWh or more. Rooftop PV, for example, can cost as low as $0.085/kWh in North America for commercial and industrial installations.

Two factors should help avoid a major collapse in genset sales if diesel prices spike severely in the coming years. First, gensets remain the cheapest (by capital cost) and most widely used (by shipped capacity) DER on the market and are generally cheaper than battery storage for long-duration applications—at least for now. Second, higher oil prices mean more exploration and production investment, which means more generators sold into that segment.

Distribution and Diversity Will Continue to Increase

Still, higher oil prices represent a call to action for stakeholders across the electricity generation value chain. Genset manufacturers, renewables developers, and even utilities can benefit from deployment of smart gensets. Genset manufacturers that don’t embrace other complementary DER are simply burying their heads in the sand as they await the inevitable end of a hundred-year-old industry. Indeed, genset companies like Wartsila, Cummins, and Fairbanks Morse have made partnerships and acquisitions to build out offerings like solar PV, battery storage, and advanced platform offerings. Gensets, these ubiquitous and flexible DER at the heart of so many microgrids and distributed energy systems, will continue to play a significant role in our distributed energy future.