Throughout 2018 I wrote on the eight mountain west states (Arizona, Colorado, Idaho, Montana, Nevada, New Mexico, Utah, and Wyoming) cooperating on building out a regional EV fast charging network, and Colorado’s own plans to support EVs. At the end of October, the states participating in the Regional Electric Vehicle Plan for the West (REV West) published new updates, moving their plan of a regionally coordinated EV charging network one step closer to reality.

The October 2018 update is meant to serve as a platform for REV West to coordinate its upcoming infrastructure investments, among other things. This plan intends to create interstate corridors capable of sustaining interregional EV travel by building charging stations every 25 to 50 miles. Road networks in the plan span over 7,300 miles, hence a comprehensive network requires somewhere between 600 and 1,200 stations. The current inventory of DC fast charging (DCFC) stations in REV West states is over 230. Excluding the proprietary Tesla Supercharging network, which can only be accessed by Tesla owners, there are fewer than 150 stations. This creates a shortfall of some 440 to 1,000 stations. The figure below illustrates the current state of DCFC in the REV West states. 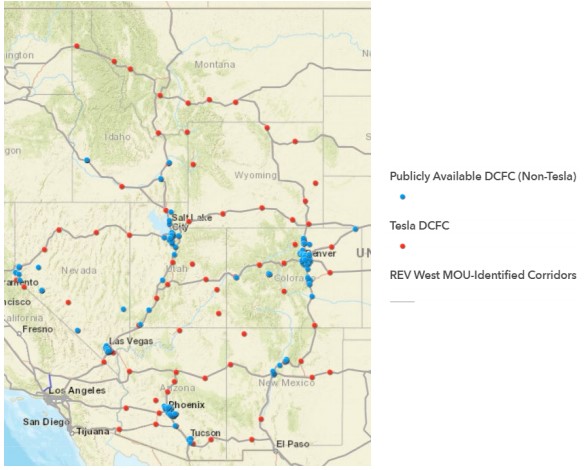 Thanks to the Volkswagen settlement from Dieselgate, the REV West states have received a large sum of money from the Environmental Mitigation Trust (EMT) that can be spent on transportation decarbonization strategies. Of these funds, up to a total of $36 million can be spent on EV charging infrastructure. So far, six of the REV West states have announced their planned allocation of EMT funds, which will result in spending just over $25 million of these funds on activities that would fill this shortfall.

Funds from the EMT alone will not be enough for REV West to build a network capable of supporting interregional EV travel. Considering a recent grant of over $10 million awarded to ChargePoint from the Colorado Energy Office to build 33 DCFC stations in the state, financing the construction of such a network is going to be on the order of $130 million to $300 million.

With the world moving toward an EV future, it’s a matter of when and how these additional stations will be built. REV West states have chosen to subsidize charging infrastructure projects to hasten EV adoption, not to secure their future. Assuming this inevitability, there are several potential avenues in which the funding will be secured in the coming years:

Building out charging networks could involve any combination of these four, and the REV West states are looking to kick-start a regional network and stay ahead of the curve.