Price Intervention in the EU ETS: Two Steps Forward, One Step Back?

The European carbon market has recently rebounded dramatically to reach high price levels last seen 10 years ago. Could that trigger Article 29a and lead to measures to manage prices?

Reforms to the European Union Emissions Trading System (EU ETS) for the period 2021-2030 were adopted in March 2018. These are credited as the main reason for the increase. Analysts subsequently updated their price forecasts. Current levels weren’t expected until around 2025-2026. However, market players appear to have had much higher levels of confidence in the reforms and analysts have recently been scrambling to increase their forecasts.

The Market Stability Reserve (MSR) will start reducing the auctioning volumes of allowances in January 2019. Compared to the 946 million originally planned to be auctioned in 2019, the MSR will reduce volumes by over 25% (265 million allowances) during the first 8 months of 2019, with further reductions during the last 4 months. The MSR will continue to reduce volumes until allowances in circulation reach a predetermined volume defined in legislation.

Suddenly, market stakeholders and observers are poring over the mechanics of Article 29a of the EU ETS Directive and discussing interventions to lower prices. While there is no automatic link between the trigger and an intervention, the European Commission must convene a meeting of the Climate Change Committee (CCC) if, for more than 6 consecutive months, prices are 3 times higher than the average over the 2 preceding years.

There are several uncertainties in the wording to warrant different calculations on when that point is reached. If we assume a rolling 2-year average that does not overlap with the 6-month period using average monthly prices, the trigger would be met in January 2019 as long as average monthly prices stay above €20.00 ($23.45) as shown in the figure below.

EU Allowance Prices in the Context of Article 29a 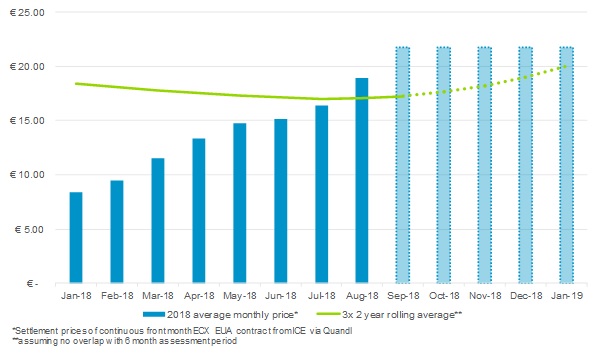 Measures to increase auctioning volumes can only be adopted if the price changes do not correspond to changing market fundamentals. Amendments to regulations, which seem to be the main price driver, are arguably changes to market fundamentals in a market created by regulation. It is therefore hard to envisage any of the possible measures to increase auctioning volumes being implemented.

Why Does It Matter?

The bigger story here is fact that at current levels, prices have effectively factored in almost all the gains expected until 2030. These above €20.00 prices starkly contrast with the single digit prices that persisted from 2011 until early 2018, which prompted the creation of the MSR and back-loading (even if neither had the desired impact at the time).

There was no expectation that this price increase could happen since the gradual cap reduction, the existing surplus, and the fairly stable forecast emissions would ensure a gradual increase in prices. On the contrary, some stakeholders expected prices to remain in single digits for most of the next decade due to the European Union’s renewable and energy efficiency targets, while the introduction of a carbon price floor was gaining traction in some Member States.

While there is some discussion on these provisions and it is likely that a meeting of the CCC will be convened, counteracting the recently adopted reforms would be a difficult political decision to take. This is even more true in a market plagued by a fundamental surplus. The amendments that kick-started the current bull run have not yet begun to actually reduce allowances in circulation.

There are potential grounds to call recent increases excessive, which Article 29a is supposed to mitigate. However, it would be surprising for regulators to start taking a step backwards by increasing auctioning volumes before a reasonable amount of time has passed to evaluate market direction.