Deliveries of plug-in EVs (PEVs) are higher than in years prior. In November 2018, global sales closed in on 240,000, bringing year-to-date sales to almost 1.73 million. Although global PEV sales have been on the rise, PEV sales in the European markets have been in somewhat of a slump, only just gaining ground back to summer highs in November 2018. In prior months between June 2018 and October 2018, European PEV sales fluctuated, receding almost 30% one month and never growing by more than 10%.

In December 2018, Europe had nearly 40,600 PEV sales bringing the year-to-date total sales to around 386,000. The Renault ZOE sold the most in December with over 5,300 deliveries. The Nissan Leaf came in at a close second at over 3,600 sold. Mitsubishi’s Outlander plug-in hybrid EV (PHEV) was the only other vehicle model to eclipse 3,000 in monthly sales, but both the Tesla Model S and the Jaguar I-PACE each sold over 2,900. 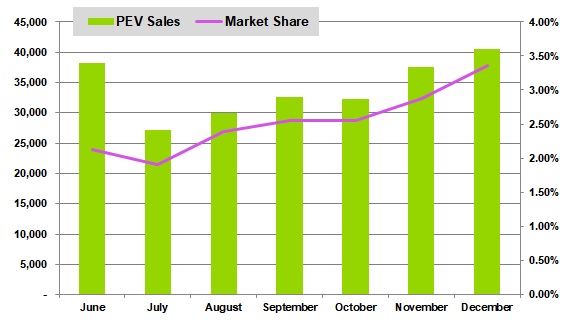 December PEV sales made up nearly 3.4% of all vehicle sales in Europe. Historically, global PEV sales are second highest in November, with December being the No. 1 month. This has been true for the past 3 years.

In October 2018, the UK announced changes to its Plug-In Car Grant program, essentially ending PHEV eligibility. Initially, the grant program had three vehicle categories based on the range of the vehicle. Category 1 vehicles had a zero-emissions range of over 70 miles, Category 2 had a range between 10 and 69 miles, and Category 3 had at least 20 miles. The new grant framework makes only vehicles in Category 1 eligible for grant funding. Additionally, the UK has decreased the amount available from £4,500 to £3,500 ($5,886 to $4,578).

These changes are intended to concentrate efforts on bringing more BEVs to market, and will no doubt affect the Outlander’s sales numbers in the region. UK sales were responsible for about one-third of the Outlander’s European sales. With no comparable BEV alternative to the SUV body-style of the Outlander yet available in the UK, lost sales due to policy change may not directly translate to new BEV sales immediately but alternatives are on the way.

Is Rural US the Next Investment Market for Charging Network Operators?

Is Rural US the Next Investment Market for Charging Network Operators?