In April, the New York Independent System Operator (NYISO) released its annual Gold Book, which provides long-term forecasts for electric load and generation capacity. In the past, load forecasts displayed steady growth over time, assuming growing populations and demand for electric appliances and devices. However, the 2019 report shows future ebbs and flows of demand, indicative of the changing energy profile of consumers and businesses around the world.

Changes to the Forecast

The energy growth rate over the first 20 years in the 2019 forecast is higher than the rate published in the 2018 Gold Book. The higher growth can be attributed in part to the increasing penetration of EVs, especially in the later years. At the same time, load-reducing impacts occur, such as energy efficiency measures and the growth of solar PV. New York State’s energy policies and programs, developed as part of the Reforming the Energy Vision proceedings, play a large role in the growth of these trends.

The table below reports the statewide energy and peak demand forecasts. The forecasts start with modeled end-use consumption and then account for the impacts due to EVs, behind-the-meter solar PV, behind-the meter distributed generation, energy storage units, and energy efficiency and codes and standards. 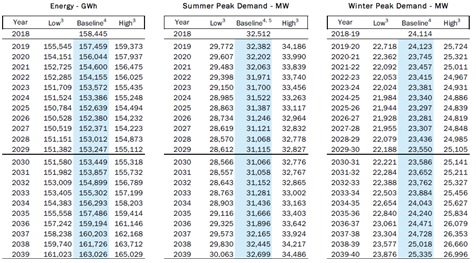 There is a trend that over the next 10 years of energy, demand in the summer and winter expected to decrease due to the state’s expansion of energy efficiency programs and solar PV incentives. However, the second half of the forecast shows a rebound in all categories, mostly attributable to the long-term growth of energy storage and EVs. Winter demand has a higher growth rate than summer demand, leading to a more balanced annual load shape. This implies a higher load factor for the supply resources on the grid, which should have a beneficial effect on system reliability and prices to consumers.

On the generation side, the mix of projects in the interconnection process are split almost exactly 50/50 between fossil fuel and renewables/energy storage:

While New York is seen as a leader in reducing energy consumption and expanding clean energy sources, it is still a good barometer for larger changes that can be seen across the US and worldwide. Utilities and energy providers need to be aware of trends and figure out how to benefit themselves and their customers in a reliable and cost-effective manner.

By Jessie Mehrhoff
Industry Insight May 03, 2019