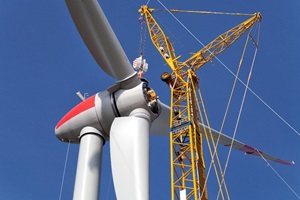 The latest battleground in the ever tightening wind turbine market is with onshore wind turbines in the 4 MW range. Until now, this segment has had few offerings and only minor commercial deployments. No less than four turbine OEMs announced new 4 MW turbine models over the past few months. The overwhelming majority of annual onshore wind turbines installations are in the 2 MW to 3 MW range, and innovation continues to occur rapidly in that nameplate space.

There are also efficiencies of scale with producing the most megawatt-hours from each single wind turbine foundation and tower. This factor is more quantifiable with offshore wind, where foundations and installation cost is proportionally much higher than it is for onshore. In general, onshore turbines represent around two-thirds of onshore project CAPEX while offshore turbines represent one-third of offshore project CAPEX due to the higher foundation cost. This is why offshore wind turbines may double in size by 2025. The same principle applies (to a lesser degree) that the more AEP per turbine in the onshore realm, the better the project economics.

The following are summaries of the most recently announced turbines competing in this new 4 MW battleground: