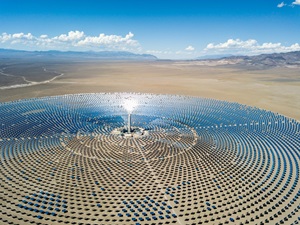 In a blog earlier this year, I covered the record-breaking low prices our local utility Xcel Energy had received for new solar, wind, and energy storage projects here in Colorado. We've recently seen two major developments for regulations and new projects that are quickly turning the state into one of the country’s hottest markets.

Following a bill passed in March by the state legislature recognizing customers’ rights to install energy storage, a new bill was signed in early June to support the development of large-scale storage in Colorado. House Bill 18-1270, also known as the Energy Storage Procurement Act, directs the Colorado Public Utilities Commission to “create conditions” that facilitate the procurement of energy storage technologies to help address the grid’s peak demand issues, improve reliability, and avoid more costly and disruptive infrastructure investments. With this ruling, the state legislature has recognized the cost-effectiveness of energy storage compared to other resources in reducing the operational cost of the grid while improving reliability.

Xcel Leading the Way with Wind and Solar Plus Storage

While many utilities throughout the world have chosen to pursue investments in renewable generation and energy storage long after being directed by regulators, Xcel announced its preferred Colorado Energy Plan Portfolio (CEPP) on June 8. The utility intends to dramatically reduce its use of coal generation in favor of flexible natural gas, wind, solar, and energy storage. It is capitalizing on the falling costs of these technologies and the abundance of flat, open land with world-class solar and wind resources throughout its service territory. This announcement represents the aggressive push to transition to a cleaner, more locally based energy system for which many of us in Colorado have been waiting.

Specifically, Xcel plans to add approximately 1,100 MW of utility- and third party-owned wind generation in the Colorado Eastern Plains. These resources will be developed based on the unprecedented low pricing in the utility’s recent all-source solicitation announced in January 2018. Wind projects were bid on a levelized cost basis for as low as $11/MWh. However, since low cost wind power is well-established in the state, the big story in Xcel’s latest announcement is the adoption of large-scale solar plus storage projects. The recently bid solar plus storage projects included prices as low as $30/MWh, among the lowest seen anywhere in the world. 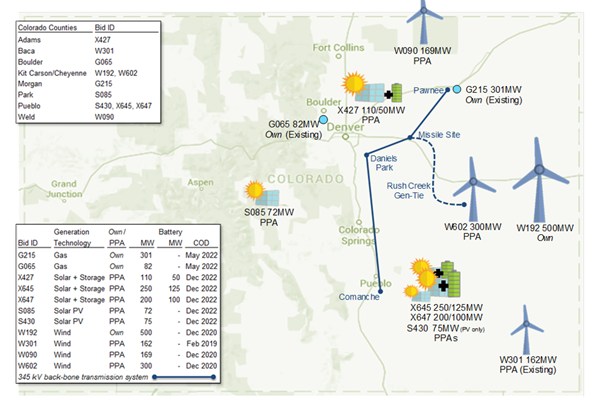 Based on the project map above released by Xcel, Pueblo County will be the epicenter of this new solar development. The county will host the state’s largest solar plus storage project, a 250 MW solar PV plant paired with 125 MW of energy storage capacity. A second, slightly smaller project will also be developed in the area, with 200 MW of solar capacity and 100 MW of storage. Xcel’s third solar plus storage project is planned for developed north of Denver, with 110 MW solar and 50 MW of energy storage.

While they may not come online until late 2022, these new projects will establish Colorado as one of the most advanced markets in the country for large-scale renewables and energy storage. Xcel’s actions highlight the potential advantages for investor-owned utilities that choose to pursue investments in energy storage. Storage prices have fallen far enough to make the technology and economical investment competitive with other resources. Xcel is moving quickly to ensure it capitalizes on this new local resource.