Hybrid power systems have traditionally been defined as a blend of fossil and renewable energy technologies. This hybrid approach to power generation has been at the core of the microgrid value proposition. This is especially true in remote power applications, where the cost of diesel is so high that integration with renewable energy resources—whose fuel is free—reduces ongoing operating costs. As the proportion of renewable energy increases beyond certain thresholds, longer duration batteries capable of storing renewable energy over several hours are required to optimize the entire distributed energy resource portfolio to realize the resiliency and reduced cost value propositions inherent with the microgrid platform.

NantEnergy is a new company that combines a long duration, low cost battery solution inherited from Fluidic Energy with the lithium ion (Li-ion) batteries previously sold by Sharp Electronics, also part of the NantEnergy offering. This hybrid battery solution fits the theme of a greater hybridization of grids, whether one is focusing on power generation, alternating current (AC) and direct current (DC) infrastructure, or battery solutions. NantEnergy is integrating battery chemistry configurations (zinc-air [ZnAir] and Li-ion) to provide optimal value for end users. This is particularly relevant as power grids, including microgrids, seek to maximize renewable energy power generation.

Duke Energy, one of the leaders among utilities investigating microgrids, deployed ZnAir technology at its own remote telecom site, pairing the battery with solar PV and thereby eliminating the costly upkeep of a long feeder line in Smoky Mountain National Park. Guidehouse Insights recognizes that the same value streams captured in such remote power applications can be applied to grid-connected projects, whether developed by third-party developers or utilities.

While first commercial applications date back to 1920s, ZnAir battery applications were focused on remote railroad signaling and harbor buoy lighting. In 2019, however, the characteristics of the battery are ideal for stationary energy storage applications. The relatively simplistic design of ZnAir batteries offers the potential for lower cost manufacturing compared to other battery chemistries with less supply chain risk and environmental impact. A primary reason for this is the lack of expensive and potentially volatile compounds found in other batteries including cobalt, vanadium, and lithium. The Los Angeles Times recently reported nearly 2,000 lithium claims have been staked across 30,000 acres of public land administered by the federal Bureau of Land Management in California at the edge of Death Valley.

ZnAir is one of the most flexible and lowest cost technologies currently available due to its ability to decouple power from energy and the ability to scale from several kilowatt-hour to multiple megawatt-hour installations with a low cost relative to other battery technologies. The figure below helps demonstrate how ZnAir compares to other batteries. 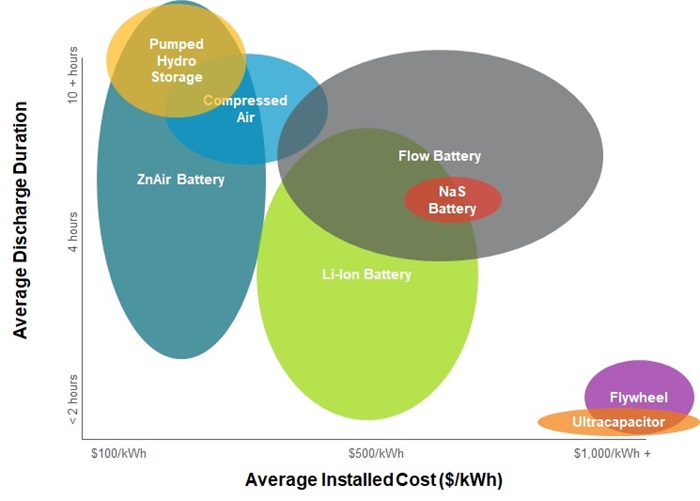 The Advantages of Hybridization

The advantage of the hybrid battery is that it offers both long-term storing of clean renewable energy and the ability to respond to grid needs through the provision of ancillary services.

Power infrastructure is becoming hybridized. Not only are fossil and renewable energy being combined, batteries are now serving as a bridge between supply and demand optimization. As the penetration of renewable power generation increases, new grid services are required to ensure that new generation resources can be integrated effectively. NantEnergy’s hybrid battery offering fits neatly into this space. A new white paper, coauthored with senior research analyst Alex Eller, delves into the potential of ZnAir technology.