Over the past 2 years, micromobility sharing programs that use e-scooters have experienced rapid global growth. Larger companies like Uber and Lyft have micromobility subsidiaries (JUMP and Motivate, respectively) that compete with emerging startups, such as Bird and Lime. These emerging startups have also had success in various cities. According to a recently published report, Electric Two-Wheel Vehicles, from Guidehouse Insights, global annual e-scooter sharing trips are expected to grow from roughly 228 million trips in 2019 to 847 million by 2028, at a 12.7% compound annual growth rate. 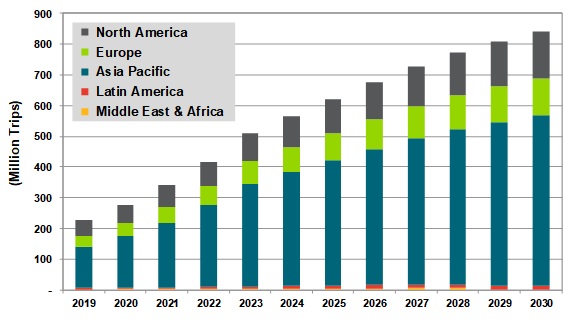 The ubiquity of wireless communications and the convenience and ad hoc nature of micromobility are projected to be the major growth drivers for these services. Micromobility sharing programs offer a cheaper alternative to other forms of mobility as a service (MaaS) such as taxis, ride-hailing, and carsharing. It can also be more convenient when weather conditions are favorable and vehicle availability is widespread. It is extremely appealing to have the ability to pick up and drop off an  e-scooter almost anywhere in a dense urban environment, especially for those who want to avoid traffic and more costly MaaS options.

The rapid proliferation of micromobility sharing programs has led to resistance from some municipalities and communities due to safety and aesthetic concerns. Dockless e-scooters are being left on sidewalks and other public spaces, causing backlash from city residents. For example, after scooter rental companies flooded San Diego with around 40,000 e-scooters, in July 2019, the city mandated the reduction of the total vehicle count to 20,000 scooters due to safety concerns. Some cities, such as San Francisco, Paris, Atlanta, and Portland, participate in micromobility sharing but have imposed strict regulations on services. Meanwhile, other cities have temporarily banned their use, such as Boulder, Colorado, and Manhattan, New York.

Although regulations prohibiting the use of micromobility are somewhat of a concern in the short-term, these issues are common to new technologies and are expected to be ironed out as congestion increases and as cities acknowledge the need for multimodal transport offerings. Micromobility companies are increasingly working with city officials from the beginning to ensure smooth deployments and public acceptance.

Suppliers need to create sustainable business models and form long-term, cooperative partnerships with cities to ensure financial sustainability and community acceptance in the cities in which they operate. Major issues that can be improved upon include the short lifespan of the vehicles and the high cost of paying workers to collect and recharge e-scooters. Micromobility suppliers should design and produce more durable and customized e-scooters to offset the short lifespan of the vehicles and any vandalism issues that may arise. They should also invest in next-generation technologies such as automated and teleoperated e-scooters that can drive themselves directly to customers and company charging stations. This is expected to save significantly on operational costs and provide a competitive advantage in the market.

Battery Swapping Is Playing an Important Role in Micromobility

Battery Swapping Is Playing an Important Role in Micromobility