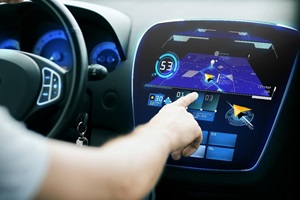 When I was young, maps were printed on paper, either bound into atlases or large sheets that were a puzzle to refold. We plotted routes to get from where we were to where we wanted to be. In-car electronics were largely limited to the AM/FM radio and maybe a tape player.

Maps in the car now are a mass of bits and bytes. Increasingly, the car itself is reading that data directly to make control decisions without any direct input from us mere humans.

The Decline of Paper Maps

The transition from paper maps to in-vehicle digital navigation got rolling in the mid-1990s. Early attempts at dead-reckoning navigation systems were limited and error-prone. The opening of the military’s satellite global positioning system (GPS) to civilian use was the key to success. The advent of the consumer smartphone a decade ago with built-in GPS and access to cloud-based Google Maps made it seem for a time that those pricey built-in navigation systems with costly annual map updates might become consigned to obsolescence.

Recently, I’ve had the opportunity to spend time with several different production cars using increasingly detailed embedded maps to improve fuel efficiency and safety in ways that a smartphone-based system is not capable. The humble map has now become a crucial long-range sensor input in cars ranging from the $25,000 Hyundai Ioniq to the $150,000 Mercedes-Benz S560.

Mercedes-Benz debuted predictive navigation as a powertrain control input several years ago with the S-Class plug-in hybrid and the Ioniq and Kia Niro are now doing the same. These electrified models take advantage of topographic information in their maps to manage the blending of power delivery from their electric motors and internal combustion engines.

How Do Embedded Maps Work?

By looking down the road on the map, the vehicles can detect when they will crest the peak of a grade they are climbing to go downhill. In such a situation, hybrids would typically limit the depth of battery discharge to help maximize battery longevity. However, if the powertrain control knows a downhill is approaching where it can recover energy through regenerative braking, it can increase depth of discharge (run longer on electricity) while climbing. This displaces use of the gasoline or diesel-powered engine, resulting in improved overall efficiency.

What Do Map Capabilities Mean for Automakers?

As automakers deploy ever more automated driving capability, they are also leveraging those digital maps to provide smoother and safer control. For the 2018 Cadillac CT6 with hands-off, partially automated Super Cruise, GM uses high-definition maps to geofence use, limiting it to divided highways. Once in use, the maps are used to augment the camera and radar sensors by looking 2,500 meters down the road for curvature and banking. If Super Cruise determines that the current speed set by the driver is too fast to safely get through a curve, it will automatically reduce the speed going into the curve and then resume the previous speed.

On the 2018 S-Class with Intelligent Drive, Mercedes takes this a step further. The Mercedes system requires the driver to keep hands on the wheel but allows its use on all roads. When active, it looks ahead for features like curves and roundabouts and automatically reduces the speed to a safe level. Activating the turn signal will cause the car to slow down as it approaches the next intersection on the map, allowing the driver to go around the corner without touching the brake pedal.

Thanks to the increasing interest in drive automation, the embedded navigation systems that seemed like they would be killed off by the smartphone are set to become a standard feature on all new cars in the next several years.