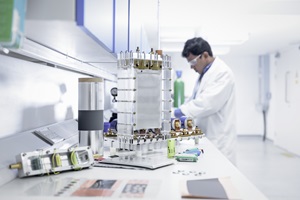 On June 29, Pacific Gas & Electric (PG&E)—one of the country’s largest utilities—announced its latest round of new energy storage projects, dwarfing all previous procurements in the state. PG&E will see four new projects built in its territory, with three interconnected at the transmission level, and one representing a network of aggregated behind-the-meter systems. When completed in late 2020, this round will account for the two largest battery energy storage projects in North America, and the largest battery energy storage project anywhere in the world. Details on the four projects are provided in the table below.

With these new projects, PG&E will far exceed the total storage capacity the utility was required to procure through the state’s energy storage mandate. In fact, this procurement of 567 MW would nearly meet the utility’s entire mandated total of 580 MW. In addition to the massive size of these projects, there are several noteworthy aspects to this announcement.

The latest projects for PG&E come in response to a January 2018 ruling that rejected the "reliability must-run" designation for three gas plants by the California Public Utilities Commission (CPUC). With that ruling, CPUC directed PG&E to explore opportunities to use energy storage and other preferred resources to meet its needs if those resources are deemed cost-effective. This procurement highlights the increasing competitiveness of energy storage to provide peak capacity and resource adequacy services compared to conventional generation resources.

The approval of such a large capacity of energy storage is also an indication that the utility anticipates it will continue to have a surplus of generation capacity after the projects come online. The excessive surplus generation in the state has been exacerbated by the growth of variable renewable generation, which further erodes the business case for conventional plants that are only needed during certain times of the year.

With a total energy capacity of 2,270 MWh, these new projects will provide a critical tool for making the most of the over-generation of solar during the middle of the day, and the challenging duck-curve ramp in the evening. The rapid growth of solar generation in recent years has resulted in excess generation and negative wholesale pricing during the middle of sunny days in California. The introduction of this massive new storage resource should allow PG&E to store excess energy for use during peak periods, reducing the need for conventional plants to remain online and ramp up during the evening.

One of the most noteworthy aspects of this new announcement is that PG&E itself will own one of the projects (Tesla’s 182.5 MW Moss Landing Project). Previous procurements of storage in California have relied on third-party owned projects that provide services to utilities on a contractual basis. This is a major validation for storage technology. One of the country’s largest utilities now confirms that the technology risk of battery storage is minimal, and that it can deliver the promised benefits at a competitive cost.