The rise of solar plus storage projects has been a major driver of the energy storage industry in 2019. It represents the next technological frontier for large solar PV plants. In a recent report from Guidehouse Insights, I examine how utilities are fueling this growth through combined solar plus storage power purchase agreements (PPAs). Combining these technologies in large projects provides significant advantages from economic and technical perspectives.

The combination of solar PV and energy storage at single facilities increases the value of new solar generation on networks already experiencing high penetrations of solar midday. The addition of energy storage ensures that power fed into the grid is maintained at a set frequency and voltage with managed ramp rates, reducing the need to upgrade grid infrastructure. The primary advantage of pairing these technologies is shifting large volumes of solar energy into evening peak demand periods to offset the use of costlier fossil fuel generation.

These advantages, combined with the dramatic decrease in project PPA prices, have allowed solar plus storage projects to be economical in more states. The chart below shows how PPA prices fell 79% from late 2015 to early 2018 and have levelled off around $30/MWh. Guidehouse Insights expects the 2021 levelized cost of energy for a new combined cycle gas plant in the US to be $41/MWh-$47/MWh. 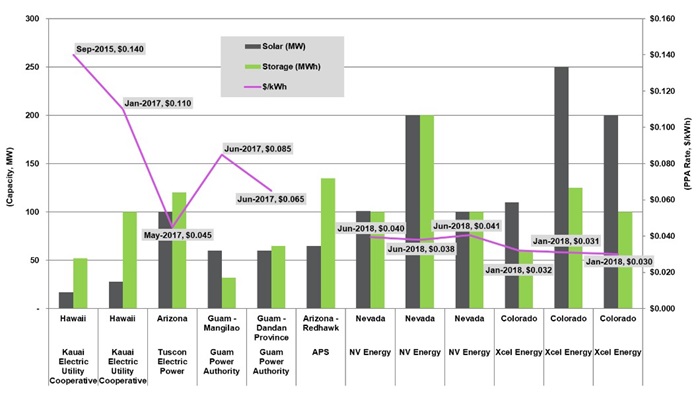 Since Xcel’s record-breaking solar plus storage contracts at $0.030/kWh, the market has accelerated with new projects announced throughout the US. Much activity has centered in California due to its mandates for clean energy procurements and high electricity prices. California’s energy regulators recently estimated that solar plus storage is expected to play a major role in the energy mix by 2030, with up to 11 GW of new solar generation tied to 44 GWh of energy storage. This potential is highlighted by a recent contract between the Los Angeles Department of Water and Power and 8minute Solar Energy for a 25-year PPA at $0.027/kWh. The Eland Solar and Storage Center will include 400 MW of solar PV paired with 300 MW/1,200 MWh of storage capacity.

In 2019, the US Southwest saw many announcements of larger and lower cost solar plus storage projects. New projects are coming to states with far less aggressive renewable energy goals and supportive policies than California. Recent projects include:

These and other recent projects represent a market shift away from subsidized, expensive projects to new resources competing purely on an economic basis. The addition of energy storage to solar plants allows utilities to manage a project’s output to maintain grid stability while maximizing use of clean energy. As power grids globally continue to rely more heavily on solar generation, the addition of energy storage to new projects is expected to become standard and offers an opportunity to reduce electricity costs and emissions.