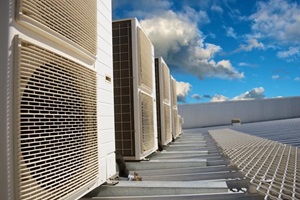 Energy efficient commercial building equipment has gone a long way in helping businesses reduce energy-related costs, as well as enabling them to become more environmentally responsible. Significant energy reductions can be realized through the installation or replacement of high energy-consuming components such as HVAC and lighting. In general, these two components are the highest consuming pieces of operational infrastructure in a commercial building. Replacing either or both of these systems will help the building owner or operator gain notable savings on energy-related costs.

When advanced digital systems, such as building energy management systems, became more prevalent, building owners and operators and energy efficiency commercial building vendors realized that even more savings could be had through coordinated control of all relevant building systems. Individual system gains can be 5% to 15% in energy savings when operating a building component in a silo. Through the coordinated operation of all building systems, savings of up to 35% or more are possible. Siloed systems can step on the actions taken by other building systems that are trying to operate more efficiently. When systems are integrated and work together toward a common efficiency goal, operational actions taken by one system don’t degrade the performance of other systems in the same building or setting.

Smart building systems, such as Internet of Things (IoT) technology, have taken commercial building energy and non-energy related performance to the next level through advanced digital intelligence. The key to IoT technology is the interconnectivity and communication between a wide variety of disparate systems to help solve an important use case for end users. Solving a particular use case can bring significant returns to a business or building through reduced energy costs or by enabling more efficient overall processes. For example, connecting a building’s security systems with the building’s operational infrastructure can reduce costs by allowing the infrastructure components to understand a building’s occupancy, and adjust lights or temperatures to suit the immediate need. Even if this is the only application of the installed IoT system, significant value can be received. But this is akin to the siloed installation and operation of infrastructure equipment described earlier. Value is received, but it may not be all the value available.

If, in the previous example, the IoT system was also used for indoor wayfinding or the tracking of company equipment assets, additional value could be realized with relatively small modifications to the same IoT system. In a healthcare setting, wayfinding is important for improving the visitor and patient experience, and asset tracking and management is important for critical care services and theft protection. In a commercial building setting, wayfinding can add to the portfolio of building services being offered, attracting a premium on rents and providing a competitive differentiator. Conversely, value can even be destroyed with ad hoc IoT implementations if two separate systems are purchased to handle energy conservation measures and wayfinding, for example, when one system could have been utilized to perform both jobs—and more.

Intelligent systems implemented in silos are no different than energy efficient building components that operate independently. That is, value may be received, but only in proportion to how much the component holistically operates with other connected components. The more data any system has available to use, the more value will be received. Lessons learned from previous siloed installations of efficient building technologies can be used in the implementation of intelligent systems as well. The more things work together holistically, the more value will be received.