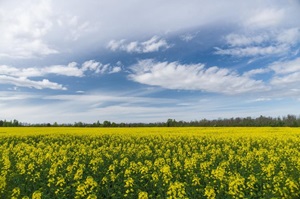 Decarbonisation of the global energy system is one of the big challenges society faces today. The Paris Agreement, adopted in 2015, states that efforts should be pursued to limit the temperature increase to 1.5°C above pre-industrial levels. In my previous blog, I explored what such increased ambition would mean for the global energy system and what a fast energy transformation could look like. I illustrated that it is possible to bring global energy use below current levels to 435 EJ and reduce annual emissions to zero by 2050 by strong energy efficiency improvements and accelerated deployment of renewable energy. Electricity, bioenergy, and hydrogen become the main energy carriers for energy services in industry, transport, and buildings.

Electricity Generation Triples because of Electrification of Energy Services

Electricity demand is expected to triple with the electrification of heat demand in industry, deployment of EVs in transport, and electrification of space heating, space cooling, and hot water supply in buildings. To enable fast decarbonisation, renewable electricity is vital. Wind turbines and solar PV currently produce 5.6% and 1.9% of global electricity production, respectively. Ecofys, a Guidehouse company, developed a decarbonisation scenario in which these technologies produce over 70% of global electricity demand in 2050. High shares of volatile renewable energy sources come with periods of too much electricity and periods of too little electricity. The power system will need to provide the flexibility to match supply and demand.

Hydrogen Will Play an Essential Role in the Future Energy System

The production of hydrogen from renewable electricity (power-to-gas) and its use for power generation (power-to-power) will be essential levers for balancing supply and demand in the future energy system. In the decarbonisation scenario, about one-fifth of the electricity generated in 2050 (which equals about 60% of current electricity consumption) is converted into hydrogen for use in the industry and transport sectors, as well as in the power sector: 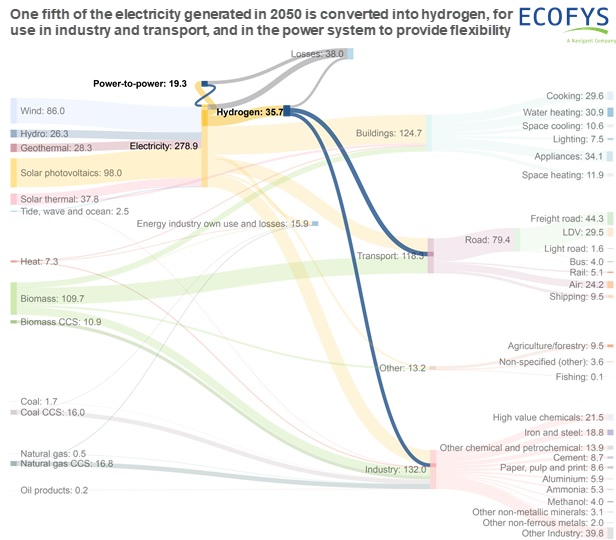 The World Market for Renewables Integration Is Growing Fast

The energy system transformation is feasible, but highly disruptive. A recent report by Ecofys, a Guidehouse company, details this transformation. All players in the energy system will be influenced by the accelerated decarbonisation of the power system. As the levelised costs of renewable energy fall and as electrolyser technologies improve and decline in price, business models to deploy power-to-gas technologies are taking shape.

As green hydrogen’s cost decreases, its potential grows and its uptake unfolds in stages. As a result, green hydrogen’s use as a chemical feedstock in the industrial sector and as fuel in the transport sector is expected to gain momentum. In energy systems with increasing shares of variable renewable electricity, the utilisation of green hydrogen in stationary applications provides flexibility for the grid (power-to-power). This is useful at times of high generation and low demand (or vice versa) for security (e.g., grid stability) or economic reasons.

In June, a 1 GW electrolyser contract was announced by Nel ASA. Starting in 2020, the company will deliver 448 electrolysers and supporting fuelling equipment to Nikola Motor Company (Nikola). This will help support Anheuser-Busch’s recent order of 800 hydrogen-electric powered semi-trucks from Nikola. The contract is indicative of the emerging market for hydrogen, and how it is beginning to shape the transport sector.