India is creating a successful solar story. The country’s recent status as a lowest cost solar producer comes as no surprise. According to the International Renewable Energy Agency (IRENA), the costs for setting up solar PV projects have dropped by about 80% in India between 2010 and 2018. Clean energy policy support, positive investment sentiments, regulatory measures, and Conference of the Parties (COP) commitments are set to help transition India’s position as a top contributor to growth in the global clean energy sector.

What Are the Numbers?

IRENA’s analysis revealed that, ‘’the country average for the total installed costs of utility-scale solar PV in G20 countries ranged from a low of $793/kW in India to a high of $2,427/kW in Canada in 2018. The lowest cost average was 3 times less than the highest, despite the convergence of installed costs in major markets in the last 3 years.’’ 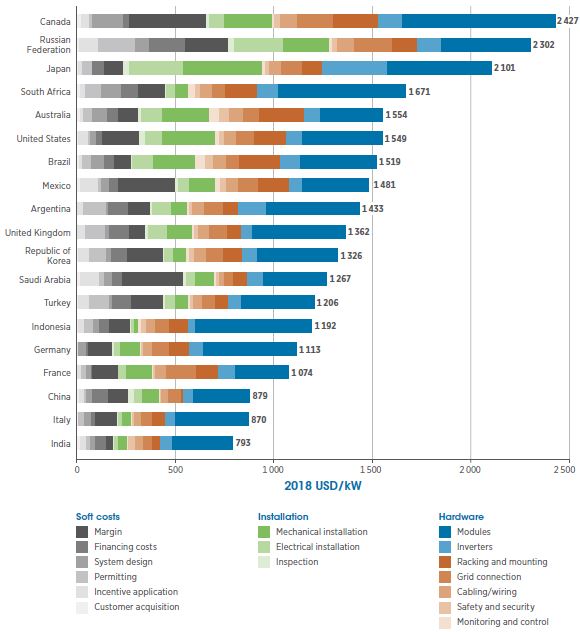 More than half of the total costs of building a solar installation in India relate to hardware, modules, and inverters. The remainder involves soft costs such as installation, system design, and financing. Until 2015, the Reserve Bank of India had included the Indian Solar industry in the priority sector lending (PSL) norms. However, interest rates would still range as high as 9%-16% depending on the bank offering the loan, thus making them unattractive to customers.

The recent removal of the PSL mechanism is likely to improve the accessibility to finance across solar investors. In a price sensitive market like India, low cost availability of solar modules, inverters, and components has not only helped the country achieve scale economies but also contributed to lower tariffs in solar prices. Additionally, low priced Chinese imports, low cost of labor, and abundant land resources have made solar very economical.

India’s Renewable Portfolio Obligation Act supports its ambitious targets to build the infrastructure needed to promote clean energy. Even though India is one of the largest markets for coal-fired power and this dependency is likely to continue, it is becoming much cheaper to build solar plants than continue investing and running coal plants. Depletion of fossil resources and coal shortages in the region has created a strong business case to substitute clean energy resources in the country.

India’s focus on energy efficiency along with growth in clean energy investment is no longer driven by market sentiments. It is based on a strong foundation of both policies and economics. According to Guidehouse Insights’ recent estimates, India will reach almost 40% of it 2022 target and is on track to reach 100 GW by 2022. Better financing options and a lower cost of debt can help reduce solar prices even further making the country with most attractive solar prices globally.