How Delivery Drone Suppliers Can Move Toward Widespread Adoption

In my previous blog, I outlined how delivery drones are emerging as a key technology in the fight against COVID-19. Several companies have demonstrated how drones can help with the contactless delivery of high priority consumer goods and assist the healthcare industry in the transportation of medical supplies. This blog focuses on actions drone suppliers can take to build off the increased demand from COVID-19 and encourage more widespread adoption over the coming decade.

Guidehouse Insights’ report, Delivery Bots and Drones Could Revolutionize Last-Mile Logistics, anticipates that delivery drones will make over 420 million deliveries annually by 2030. The COVID-19 crisis is resulting in a ramping up of deliveries that will likely result in the surpassing of previous 2020 forecasts; Guidehouse Insights previously estimated that delivery drones would make roughly 43,000 deliveries in North America and 179,000 globally in 2020. 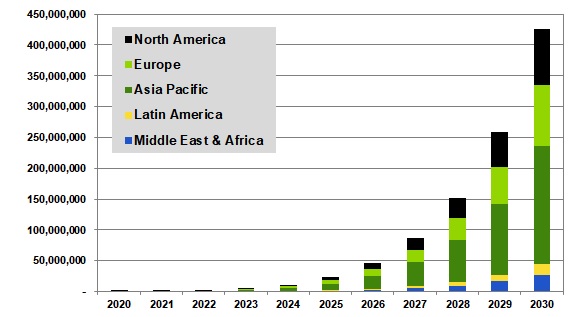 While regulatory reform will be crucial to enable the widespread use of delivery drones, Guidehouse Insights recommends delivery drone manufacturers and operators focus on several priorities they can control to move the industry closer to large-scale adoption. These priorities include the following:

Roboscooters Will Go Mainstream Before Robotaxis

5G Will Not Be a Cure-All for Automated Vehicles

By Sam Abuelsamid
Industry Insight May 22, 2020

Roboscooters Will Go Mainstream Before Robotaxis

5G Will Not Be a Cure-All for Automated Vehicles