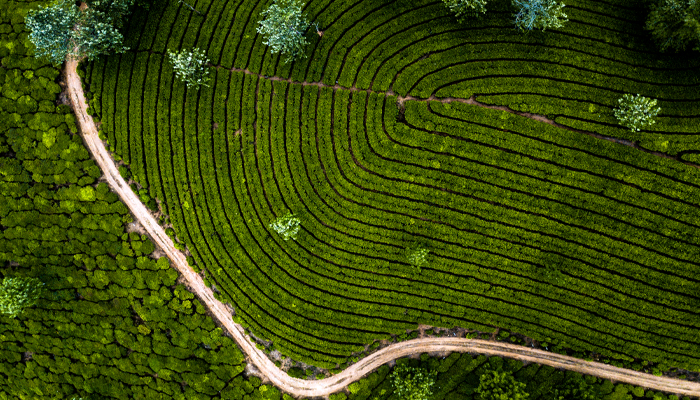 In a localized system, like a vegetable bed, elements exist in a consistent atomic ratio. If the soil lacks one necessary element, growth will be constrained even if other elements are in abundance. In agriculture, the element that most often limits biological productivity is nitrogen. Nitrogen constitutes 78% of gases in Earth’s atmosphere. Despite its relative abundance, however, atmospheric nitrogen cannot be absorbed by plants. Nitrogen in the air must be converted into ammonia in the soil so that it may be taken up by plant roots. The primary source of natural nitrogen fixation, the process by which atmospheric nitrogen is converted into organic compounds usable by plants, is nitrogen-fixing bacteria in the soil.

In 1909, German chemist Fritz Haber succeeded in converting atmospheric nitrogen to ammonia by forcing nitrogen to react with hydrogen in a high pressure, high temperature reactor. The process was soon after purchased by the German chemical company Badische Anlin und Soda Fabrik and assigned to another chemist, Carl Bosch. By 1910, Bosch successfully implemented the Haber process at a large scale and in 1913, ammonia was first manufactured on an industrial scale. By 1914, the Haber-Bosch process produced 20 tons of ammonia every day. Since the invention of the Haber-Bosch process, synthetic nitrogen fertilizers, the primary use for man-made ammonia, have revolutionized agricultural productivity and greatly increased crop yields around the world.

In 2015, just under half of the entire global population was fed by synthetic nitrogen fertilizers. To say that another way, without artificial nitrogen fixation only half of the current global population would be sustainable. Today, the Haber-Bosch process produces about 150 million metric tons of ammonia every year. The process produces over 450 million metric tons of CO2—about 1.2% of global CO2 emissions. According to one estimate, every 1 ton of ammonia produced using the Haber-Bosch process generates 1.87 tons of CO2 emissions, which is not good for climate change. Thankfully, electrification of the Haber-Bosch process is underway.

Using renewable energy to facilitate the Haber-Bosch process has the potential to greatly reduce carbon emissions generated through ammonia production. The Haber-Bosch process was optimized at a time when fossil fuels were the only feasible energy source. As such, Haber-Bosch plants have been optimized around the use of fossil fuels and generally produce ammonia using natural gas (50%), oil (31%), or coal (19%) as feedstock. Recent research on the feasibility of electrifying the Haber-Bosch process revealed that it could enable carbon-free ammonia synthesis by replacing methane reforming (the process used to produce hydrogen for reaction with nitrogen) with electrolysis and by powering equipment with electricity instead of steam.

The Japanese company JGC has been testing green ammonia production at the Fukushima Renewable Energy Institute using a process that runs on solar power and produces the necessary hydrogen through water electrolysis. JGC’s green Haber-Bosch process is supported by a new catalyst and is able to operate at a much lower temperate and pressure than a traditional plant.

In the UK, Siemens, in partnership with the University of Oxford and Cardiff University, is running a demonstration plant using the Haber-Bosch process powered by wind. The system, similar to the one used by JGC and demonstrated by Smith, Hill, and Torrente-Murciano, uses water electrolysis to provide the supply of hydrogen.

These demonstrations of an electrified Haber-Bosch process show that it is possible to decarbonize ammonia production. Doing so would greatly reduce carbon emissions associated with global agricultural production.

Beefing Up the Meat Replacement Industry

Beefing Up the Meat Replacement Industry

By Jan-Martin Rhiemeier
Back to Top
Press enter to search