In late May 2019, General Motors (GM) and Bechtel announced their partnership to create a public charging network in North America. Such strategies are common for prominent EV makers—Nissan, Tesla, Volkswagen, and NIO, among others, have all been particularly active here. Considering GM is a leading EV maker, the first to deploy a sub $40,000, 200+ mile battery EV, it would seem the company is a bit late to the party. But better late than never, and perhaps GM’s patience will pay-off with a highly efficient approach to public charging.

The plan for the charging network is to use GM’s trove of anonymized vehicle usage data (both EV and conventional) from its OnStar network to optimize station siting; Bechtel will provide the construction expertise. GM has done something similar with EVgo, using data to deploy charging stations exclusively for GM’s carsharing service, Maven Gig. The approach with Bechtel is to be slightly different from that and other automaker charger deployments that have either focused on highly trafficked corridors or that have used dealer networks for charger siting.

The GM-Bechtel goal is to effect EV adoption, and the theory is straightforward enough—put chargers where vehicles are used the most. It is expected that such a policy places much of the project’s chargers in urban areas to enable EV ownership among consumers living in multidwelling units like apartment complexes. This is likely welcome news for potential urban EV owners outside of California where, as shown in the chart below, public charging stations are few relative to multidwelling units. 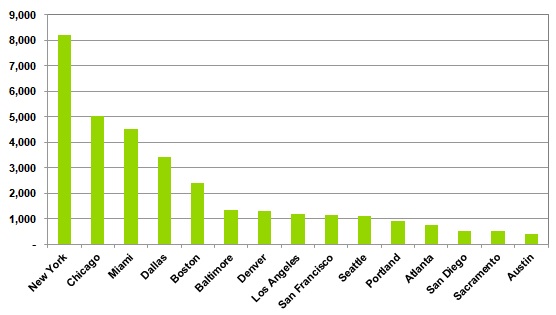 Tapping this nascent market will hopefully create dividends for the whole EV industry, which has had difficulty presenting a robust business case for public fast charging. This is because early market data suggests utilization of such chargers will be low. It should also benefit GM’s autonomous mobility vision of using EVs in the urban environment.

Early EV adopters have primarily relied on home charging units and, to a lesser extent, chargers installed by employers. Charging at these locations is either cheaper or more convenient than using a public charger. While this dynamic works for a substantial portion of the new vehicle market, it is not encouraging for the rest of the market. It diminishes the return that may be expected from public chargers, slowing investment and deployment. EV makers have been significant contributors to charging infrastructure development on the expectation that investments will be paid back in EV sales. Such a transformation cannot persist forever as EV makers are far better utilized making EVs than they are at managing charging networks.