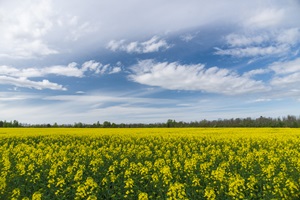 Germany, a longtime leader of energy efficiency and renewable energy, is poised for another significant policy move in clean energy with a new proposal that would reduce greenhouse gas (GHG) emission in the country by 95% from 1990 levels by 2050.

Germany’s National Energy Efficiency Action Plan (NEEAP), which is updated every 3 years, already requires stringent energy savings goals as part of the European Union’s (EU’s) Energy Efficiency Directive (EED) for member states. Germany’s current national target set forth in its NEEAP aims to achieve 40% GHG emission reductions from 1990 levels by 2020 and 80% reductions by 2050. Germany’s environment ministry expects to present the new proposal to the cabinet by this summer.

Many countries increased GHG emissions reduction goals prior to or as a result of the Paris Climate Summit in late 2015. Countries were not required to set a specific carbon emissions level, but were instead allowed to create a reduction target and strategy. Germany was not alone in increasing emission reduction targets, but based on the slow progress achieved in recent years, it will be difficult to further reduce emissions.

The country saw increases in emissions in both 2012 and 2013 but did experience a 4.6% reduction in GHG emissions in 2014 compared to the previous year. It has been suggested this decrease can be attributed to the warmer than usual winter weather in Germany during that year. In 2013, Germany’s GHG emissions were the highest of the EU member states, representing 21.17% of the EU's total emissions. The targets seem almost out of reach without substantial changes in how energy is produced and consumed in the country during the next few years. 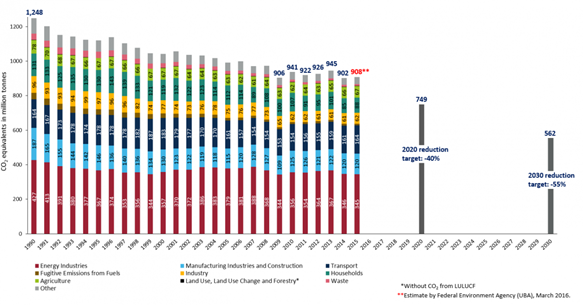 Germany is not naïve to the fact that it is currently not on track to hit its 2020 reduction targets, let alone the reductions required by 2050. The country is focusing on energy efficiency as a means to achieve these goals. It is expanding power generation from renewables such as solar and wind power, but so far these have proven insufficient to the task. However, renewables accounted for 27.8% of power consumption in the country in 2014, up from 6.2% in 2000.

Self-imposed GHG emissions reduction targets, both in Germany and elsewhere, must be enforced for the policy changes to have an impact. While the country is working to reduce emissions and is optimistic in its ability to reach these targets, its ultimate success (or failure) could largely be influenced by the actions taken in the next few years.