It is not every day that a 14 MW wind turbine is announced to the world. Siemens Gamesa's May 19 announcement is the latest salvo in a wind turbine war waged with massive offshore turbines. These turbines aim to reduce overall project cost by increasing annual energy production and reducing the number of foundations and turbines needed in future offshore wind farms. The Siemens Gamesa model is the SG 14-222 DD; 14 denotes the 14 MW of capacity, 222 refers the rotor diameter, and DD represents direct drive (no gearbox). The SG 14-222 DD employs blades that are 108 m (354 ft) long. That is the equivalent of a 120 yd (360 ft) football field. Those three blades spinning in unison with the rotor hub achieve the 222 m (728 ft) diameter.

While onshore and offshore wind turbines are constantly scaling up with taller towers and larger capacities, the greatest advance in efficiency is being achieved with larger rotor diameters. In effect, the blades are the engine of the turbine, so manufacturers have grown rotor diameters beyond what was thought possible years ago.

Siemens Gamesa’s next largest offshore wind turbine is its 11 MW, 200 m rotor unit. It is currently under prototype testing and expected for commercial operation in 2022. The increase to 14 MW provides 25% more annual energy production than the 11 MW unit. In optimal conditions the turbine can uprate to 15 MW. The company says one unit operating at full capacity produces enough power for 16,000 average European homes. Additionally, Siemens Gamesa has been chosen as the preferred supplier for Dominion Energy’s 2.6 GW offshore wind farm off the Virginia coast.

Offshore Wind Competitors Must Rise to the Challenge

Guidehouse Insights' latest offshore wind market share data covers cumulative installed capacity through the end of 2018. (2019 data being is updated in the Global Wind Database.) Siemens Gamesa leads at 55% with roughly 11.6 GW installed. MHI Vestas Offshore Wind is in second at 18% with 3.7 GW installed. The remaining market shares (shown in the chart below) are split between GE Renewable Energy, three western companies that are no longer active in offshore, and Chinese manufacturers. The Chinese manufacturers lead the Chinese offshore wind market but have no presence outside of China and that is likely to remain the case for years to come.

There are effectively two competitors to Siemens Gamesa in the global offshore wind sector: MHI Vestas and GE Renewable Energy. Both should feel renewed pressure now that they are up against a 14 MW unit. However, the Siemens Gamesa unit will not be commercially available until 2024, and its competitors are not sitting idle.

MHI Vestas currently has three models of its medium speed geared turbine platform: the V174-9.5, V164-10.0, and V164-9.5. It has not publicly announced development of a larger turbine but it surely has a development plan underway for a unit in the 12 MW-15 MW space.

GE Renewable Energy currently has a 6 MW, 150 m rotor direct drive turbine available. It is also testing a scaled-up prototype of its 12 MW Haliade-X turbine with a 220 m rotor in the Netherlands. This will be a competitive offering in the offshore wind segment when it is commercially available in the second half of 2021. GE secured a contract for its 12 MW unit to power the world’s largest offshore wind farm: the 3.6 GW Dogger Bank development area off the east coast of the UK. We are witnessing quite the race among the few companies that have the technology, expertise, and ambition to create the world’s largest turning machinery. 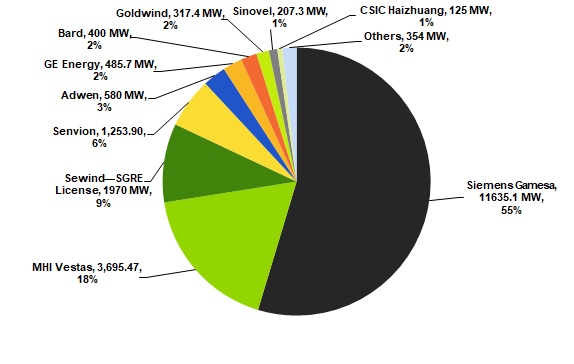