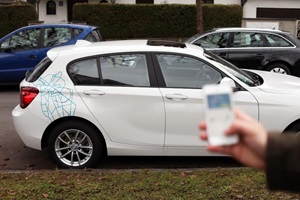 German hydrogen company Linde is experimenting with a solution to the infrastructure problem for fuel cell cars. This summer, the company will launch an all-fuel cell vehicle (FCV) carsharing service in Munich. For this trial program, Linde is partnering with Hyundai to provide the fleet of FCVs. The service, called BeeZero, will have 50 fuel cell-powered ix35 crossover SUVs (known as the Tucson in North America), Hyundai’s current entry into the fuel cell market and one of only two FCVs commercially available today.

Linde is in good company in offering a carsharing service with zero tailpipe emissions, as a number of carshare programs around the world specialize in battery electric vehicle (BEV) fleets. In its 2015 Carsharing Programs report, Guidehouse Insights estimated that around 20% of all carsharing vehicles in use globally were plug-in electric vehicles (PEVs)—mostly pure BEVs. Most of these EVs are in a handful of programs where the EV is a part of the service’s brand identity. The most famous is probably Autolib’ in Paris, run by Bollore. The Kandi carshare service in China also uses a fleet of micro EVs. Both Daimler and BMW’s carsharing services have deployed the automakers’ EVs, but not exclusively. Daimler recently switched out all EVs for gas cars in its San Diego carsharing service; the reason given was a lack of charging stations. (It will be interesting to see if the cars are reinstated once utility San Diego Gas & Electric launches its EV charging pilot program.)

The Challenge of Charging

Charging is one of the challenges for battery-powered carsharing vehicles, and likely explains at least in part why few carsharing companies integrate BEVs into their larger fleet of gas cars. Even if chargers are available, there can be problems with ensuring they are properly plugged in and that the charge stays full.

FCVs operating in fixed areas have the advantage of requiring a relatively small number of strategically located refueling stations in a city while offering longer ranges than EVs. Guidehouse Insights predicted the introduction of fuel cell carsharing services for this reason in our recent white paper on the future of transportation. This makes an easier pathway to market for FCVs than having to build a network of refueling stations to service private car ownership.

Linde is also promoting the advantages of the longer driving ranges offered by FCVs. The Hyundai ix35 has a range of over 350 miles on a tank of hydrogen. While this is indeed a key benefit of fuel cell cars, it will be useful to see how much of a benefit this is for a carshare user. Carsharing services have a few typical use cases: short inner-city trips (the kind being served by one-way carsharing operations); planned trips with slightly longer range needs; and long-distance trips, typically on weekends. The BeeZero service would presumably be used for the latter two cases, but long-distance travel might require use of a hydrogen fueling station at the destination.

Linde has said it will use BeeZero to gather information on “day-to-day fleet operations” of fuel cells and hydrogen that can be fed back into its hydrogen development efforts. BeeZero presumably also offers Hyundai not only with an avenue to deploy more of its fleet of fuel cell ix35s, which have seen limited uptake to date, but also a chance to take lessons learned into its FCV development efforts. In the long-term, it is possible to envision FCVs being deployed in carshare services sponsored by automakers and infrastructure providers in cities where only low carbon or even zero emission vehicles are permitted.