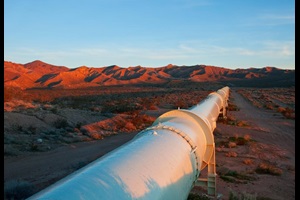 “Life finds a way.” It’s a quote seen on inspirational posters, calendars, and mugs. One location where this phrase is particularly applicable, though, is in hydraulic fracturing wells. Scientists recently discovered unique colonies of microbial organisms growing in these wells. Microbes have a massive impact on the flow of elements through our environment, so their presence in highly inhospitable fracking wells could have widespread implications for the oil & gas industry.

Thirty-one unique colonies of microbes were found in two separate wells in Ohio. Despite being geographically separated by several hundred miles, the microbial communities were strikingly similar. One species, never before identified, has been dubbed Candidatus frackibacter. This microbe likely developed in hydraulic fracturing wells, having only been found in that environment. The rest of the colonies probably came from surface ponds and adapted to the high pressure, temperature, and salinity of the shale well environment.

The impacts of these microbes on the oil & gas industry are multifold. First, a number of the microbes identified are methanogens, which produce methane as a byproduct of metabolism. Methane is a key component of natural gas, so the presence of methanogens could actually increase the net yield of a natural gas well. Osmoprotectants, compounds produced by certain bacteria to protect them from very high salt concentrations, are converted into methane by these microbes. In this case, the compound in question is glycine betaine. More research must be done, but someday oil & gas companies might stimulate wells with osmoprotectants in addition to fracturing fluid. The process of exploiting microbial methane is already in use in the coalbed methane industry.

On the other hand, these microbes could have a profound impact on the longevity of fracturing infrastructure. Corrosion of metal pipes can be a microbial process, and can happen rapidly in aqueous systems once microbes grow to a sufficient concentration. Microorganisms can greatly change the pH and alkalinity of water, leading to corrosion. This is one motivation behind adding chlorine or other disinfectants to drinking water distribution systems. As microbes become more adapted to fracturing wells, the rate of corrosion could increase over time, resulting in additional costs to natural gas producers. Thus, it may become necessary to inhibit growth of microorganisms, including the methanogens mentioned above.

Previously thought too inhospitable an environment to support life of any kind, we now know hydraulic fracturing wells host their own unique population of microorganisms. These microbes can have a huge impact on the productivity—and lifespan—of these wells. As their exact composition becomes better understood, the oil & gas industry will need to make adjustments to maximize profits and minimize any potential damage.