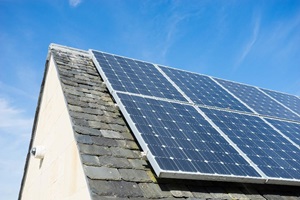 As global adoption of solar power has rapidly increased over the years, competition among solar product manufacturers and developers alike has become intense. As with all matured and competitive markets, the winning technology for the low-hanging fruit—in this case, ground-mounted traditional applications—has been picked. Crystalline silicon (c-Si)-based modules are expected to take the lion’s share of this market.

This means that solar projects suited for traditional products can be quickly signed and completed. But this has left a significant portion of the potential market unserved due to challenging building architecture or unique project locations such as highway luminaires, tents, awnings, or off-grid buildings that can’t bear the weight of a traditional solar panel.

New solutions addressing this area continue to come to market. Both building-integrated PV (BIPV) and flexible solar modules are helping to serve the needs of untapped consumers. This increase in manufacturing for both flexible panels and BIPV is expected to be in addition to the $40 billion global advanced c-Si solar module market by 2025, as forecast in Guidehouse Insights’ recently published Next-Generation Solar PV report.

With such high stakes and attractive opportunities, new products are being launched and partnerships formed. Outlined below are three recent developments in the PV space regarding new flexible panel and BIPV product offerings or partnerships.

MiaSolé, a subsidiary of Hanergy, recently released a new line of “flexible, thin, ultra-light, high efficiency, shatterproof CIGS modules” known as the Flex series. The company claims its new offering will open new solar markets and enable panel manufacturers to integrate solar on locations that have not previously been serviced.

The Flex series panels are approximately 17% efficient, much higher than previous flexible solar technologies. Furthermore, the components that house the panels are 4 times lighter than traditional rigid solar panels and are only 2.5 millimeters thick. With these characteristics, Flex panels can be designed to fit numerous non-traditional configurations and can be integrated into a BIPV design.

Panel producer Solaria recently announced that it is entering into a partnership to manufacture semi-transparent BIPV solutions with NSG Group, one of the world’s largest glass producers. The first of these new products will be launched in Europe, followed by distribution in the Middle East and elsewhere.

Although the economics are still challenging, these products are intended for customers that are looking for benefits other than ROI. The products in this arena can’t compete on economics alone; however, they are very suitable for projects where traditional panels are ruled out due to wind, weight, or other considerations.

As general solar power policies and building regulations related to PV continue to flourish at a rapid pace, so too will the growth of more specialized flexible and BIPV products. Meanwhile, the growth of traditional PV is simultaneously driving these specialized markets. Finally, increasing acceptance within the architectural community is also contributing to growth; aesthetic value will become more attractive once the overall cost of solar becomes a smaller fraction of the cost of a new building. Ultimately, these factors will ensure that the flexible module and BIPV markets will have an increasingly larger role within the overall PV industry during the years to come.

Can DER Bring the Cuban Grid into the 21st Century?

Can DER Bring the Cuban Grid into the 21st Century?