First Half of 2016 Shows a Wind Boom Underway 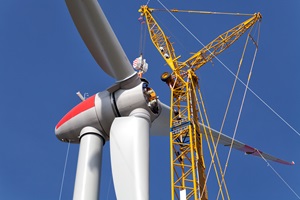 With the first half of 2016 drawn to a close, statistics on the U.S. wind market have been released from the American Wind Energy Association (AWEA) that show the expected major ramp up in wind project construction is now well underway. There are now 12,462 MW of wind projects under construction and a further 5,817 MW in advanced development. This includes over 3 GW of new construction announcements during the second quarter alone, the highest level seen since 2013.

In terms of installations completed during the first half of 2016, only a modest 310 MW was commissioned in the second quarter. This brings the total to 830 MW installed in the first half of the year. This doesn’t seem like much for a booming market, but this is a typical amount of wind generation added in a first half due to how construction occurs. The U.S. market always sees turbines gradually installed and commissioned throughout a given year toward a set goal of fully commissioned capacity by the end of a given year. Therefore, a given year’s fourth-quarter installation number is always far above the quarters that proceed it. Guidehouse’s U.S. wind market forecast estimates the year-end total to reach or exceed 8.2 GW.

The manufacturers providing turbines for the first half of 2016 are the usual big three of GE, Vestas, and Siemens. Notably, GE is typically the leading installer of wind turbines in the United States in a given year, but for projects presently under construction, Vestas leads with over 3.8 GW of capacity over GE’s 2.9 GW. Siemens and Gamesa (soon to merge) follow with under 1 GW apiece. Guidehouse Insights’ World Wind Energy Market Update 2016 report also compiles global and country-level market shares for the previous year.

Development so far in 2016 is mostly in the country’s windiest central corridor, including the states of Texas, Kansas, Nebraska, Oklahoma, Iowa, and New Mexico. Along this line, it is worth noting that the majority of wind generation is being added in politically conservative states. AWEA noted that the 10 congressional districts with the most wind power generation are in Republican districts, and now fully 88% of self-described conservatives support wind energy, up from less than 50% just 2 years ago. Wind energy has typically been hijacked by U.S. politics as a left-leaning liberal cause, but wind is slowly becoming less of a partisan issue as today’s power producers, utilities, and other end users embrace it due to its increasingly competitive cost. The average cost for installed wind projects in the country has fallen by 66% over the past 6 years, thanks mostly to more efficient and larger wind turbines.

Another key reason for the massive buildup underway in the U.S. market is policy stability, an item that the market has historically had to function without. The Production Tax Credit (PTC) extension passed last December is structured so that wind plants that begin construction by the end of 2016 will receive 100% PTC value, projects starting construction in 2017 will receive 80% of the PTC value, 60% in 2018, 40% in 2019, and zero in 2020. Most importantly, new guidance provided by the IRS in May changed the construction window from 2 to 4 years. Therefore, projects on the tail end of the PTC window will be finishing construction all the way until 2023.

AWEA collected and averaged industry forecasts from a variety of sources (including Guidehouse’s forecast), and this combination shows a wind market that will install up to 48 GW between 2016 and 2021 when tax credits wind down, representing an average yearly installation cycle of 8 GW annually. Guidehouse’s forecast is on the more conservative side with expectations of 38.2 GW installed by 2021, but this may be revised upward as market activity is analyzed going forward.