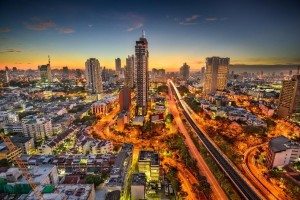 In our initial blog on Europe’s energy transition, we discussed seven megatrends that are fundamentally changing how we produce and use power. This blog discusses how converging industries and new entrants are changing our industry, specifically focusing on smart cities as a key area where this convergence and disruption is occurring at an accelerated pace. Finally, we will discuss what this means for the many market players that want to participate and survive in the Energy Cloud.

Europe’s focus on the interdependent goals of creating a low-carbon economy, ensuring energy security, and enabling competitive energy markets make it a test bed for many of the developments associated with the energy transition. This is reflected in the European market’s attraction for players across the energy value chain, including many new entrants who see an opportunity to disrupt the traditional utility industry and take market share away from incumbent utilities.

The role of energy companies, including utilities, network operators, and oil & gas companies, is being transformed by a series of fundamental shifts, including the following:

How Industry Giants Are Responding

As a consequence of these changes, electricity utilities are under pressure. As revenue declines, costs are increasing due to needed investments to provide safe, reliable, and affordable power while also supporting an emerging, cleaner, and more distributed and intelligent grid that is required to provide needed flexibility. Therefore, utilities are looking for new revenue streams and thinking through new business models that will create shareholder value going forward. Oil & gas companies, under additional pressure because of the continued low oil price, are looking for ways to survive by taking out costs, reducing their upstream capital investments, and shutting down unprofitable assets. However, their long-term future also requires them to find new opportunities to grow revenue and shareholder value in new energy businesses.

Both utilities and oil & gas companies are looking to turn the challenges of the energy transition into their advantage through entry into new markets and the delivery of new energy platforms and services. Total’s Chairman and CEO Patrick Pouyanné has stated that the company’s goal “is to be in the top three global solar power companies, expand electricity trading and energy storage and be a leader in biofuels.” Meanwhile, French energy giant, Engie (formerly GDF Suez) has been investing heavily in renewables and storage technologies, developing its energy services business, and establishing its Cities of Tomorrow programme to target the growing smart cities market.

European utilities have also been embracing DER and developing alternative business models to capitalise on new technologies and the changing resource mix. This is especially true in Germany, where there are high levels of DER, and utilities like RWE and E.ON have begun transforming their business into a more capital-light, DER-based model by shedding centralised generation assets and positioning themselves as enablers and integrators of new DER resources. For example, RWE has invested in and formed a rooftop solar partnership with German solar developer Conergy and is white labelling Sonnenbatterie’s behind-the-meter battery systems for solar-equipped German homes. As DER penetration in Europe accelerates, we see more value in moving from generation to distribution and beyond the meter.

Energy market incumbents are developing strategies to position themselves as the leading force in creating the new order. At the same time, other players—from giants in the transport, IT, telecommunications, and engineering sectors to energy service and technology startups—are looking to increase their share of these emerging opportunities. For example, Europe is seeing the emergence of a new class of DER aggregators aiming to take advantage of these new technologies and the utilities’ evolving business models. LichtBlick, Caterva, Next Kraftwerke, and Ampard are just a few of the companies establishing virtual power plant business models to provide additional value from the integration of DER into the European grid. Many other, much larger players also see the potential in brokering the new relationships emerging between energy companies and their end customers.

Cities at the Heart of the Energy Transition

The continuing interest in developing smart cities is closely aligned to the transformation in the energy market and provides an important example of how the energy landscape is evolving. More than any other region, Europe has recognised the importance of smart city developments to its energy transition programme. Cities are examining the sources and efficiency of their energy to reduce their greenhouse gas emissions and energy costs. In the process, cities are becoming more ambitious and proactive in setting energy strategy. They are seizing opportunities to work with utilities and other stakeholders to create new urban energy systems. The emerging vision is of a smart city with integrated large- and small-scale energy initiatives, including major infrastructure investments, citywide improvements in energy efficiency, and distributed energy generation.

Across the continent, city leaders have been signing up for ambitious carbon emissions targets and are taking an active role in encouraging utilities and other players to support their strategies. Stockholm and Copenhagen have led the way with plans to become carbon-free cities, and many more cities are now following their path. Frustrated at the slowness of the change they are seeing, some cities are even taking matters into their own hands and looking at re-municipalisation of utilities or the creation of new city energy companies. Hamburg, for example, took back control of the city’s energy in 2014. In the United Kingdom, Bristol and Nottingham have established new city-owned energy companies, and the new Mayor of London has made a strong commitment to a new energy policy for the capital.

Utilities are responding to these challenges by working closely with cities and communities to develop new energy models. Alliander, for example, has been a long-standing supporter and investor in the ambitious Amsterdam Smart City programme. E.ON has been working with smart cities in order to test integration of its smart grid solutions that enable more effective energy management and integration of DER. In Malmo, Sweden, the utility and the city signed an agreement to adapt the entire Hyllie district of Malmo to a climate-friendly energy supply. By 2020, the entire district’s electricity, heating, and cooling will be powered exclusively by renewable resources and energy recovery.

Another aspect of Europe’s urban agenda that is having a strong influence on the energy sector is the focus on sustainable transportation. The European Union has put the triple play of energy, transport, and information and communications technology (ICT) at the heart of its innovation programme for cities. Reducing emissions from transportation is the next critical frontier in the decarbonisation of the European economy—electrification of heat and transport pose the most obvious options for sustainable demand growth in the present market. Europe has arguably the strongest level of utility engagement in developing EV charging services. Utilities and energy companies such as Germany’s RWE, Italy’s Distribuzione, Ireland’s ESB, and the Danish utilities SEAS-NVE, SE, NRGi, EnergiMidt, and Energi Fyn have all funded charging deployments or invested in companies that deploy chargers. For example, Danish company CLEVER is owned by the five largest utilities in Denmark and operates a network of several hundred EV supply equipment (EVSE) stations throughout Denmark; the company is now branching out into other geographic markets. Enel has developed an interoperability platform and is aggressively deploying charging stations, with more than 2,000 deployed across Italy.

The next decade will see a reshaping of the European energy sector to meet the needs and challenges of a low-carbon economy. We have already seen some of the industry’s largest players moving quickly to expand their capabilities and services to meet these new requirements.  As discussed in Part IV of this series, further diversification and mergers and acquisitions are inevitable as players look to gain a footprint in emerging services and exploit new energy technologies.

Energy companies also need to broaden their partnership network, working with those in the public services, transportation, infrastructure, and ICT sectors to deliver the integrated capabilities needed to make the energy transition a reality. They also need to create new relationships with their customers, as they too become partners as much as end consumers. The industry giants of today are using their resources as some of the biggest companies in the world to engineer this energy transformation and to meet future shareholder interests. They will need to continually reinvent themselves and become broader and more adaptable energy companies able to protect existing revenue streams and seize new opportunities. However, not all bets will pay off. We will inevitably see some wrong turns in this process of adaptation and the eventual winners may well be those who learn quickest from their mistakes.

This blog is the sixth in a series discussing how industry megatrends will play out across Europe as well as at the regional and country levels. Stay tuned for our next blog in this series focusing on customer choice and changing customer demands.

Learn more about our clients, projects, solution offerings, and team in our Guidehouse Energy Practice Overview.