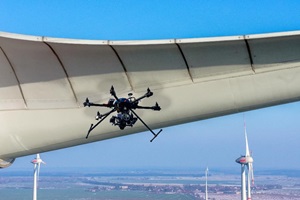 This post is the first in a two-part series. This post reviews major developments in drone use for utility asset management over the course of 2016. The second will assess opportunities for enhanced utility applications in 2017 and beyond.

2016 marked a major milestone in the march toward the commercialization of drones for utility asset management in the United States. Most notably, the Federal Aviation Administration (FAA) in late August implemented new rules governing the use of drones for commercial applications.

Known as Part 107, the rule grants utilities and other commercial entities broad authority to operate small unmanned aircraft systems (sUASs) weighing 55 lbs or less without applying for permission from the FAA. Within 12 months of implementing Part 107, the FAA forecasts as many as 600,000 sUASs will be in commercial operation.

While Part 107 marks a major victory for stakeholders eager to harness the promise of drone technology, the new rules come with a variety of restrictions, including:

These and other requirements limit the ability of utilities to deploy drones for tasks such as monitoring remote transmission lines beyond the visual line of sight (BVLOS). But utilities and drone companies are already taking active steps to advance the path to commercialization of BVLOS flights in preparation for a more expansive regulatory framework.

In February, Xcel Energy became the first US utility to conduct an FAA-approved BVLOS demonstration flight, using a UAS to survey transmission lines in the Texas panhandle. The utility is also undertaking a year-long research project in North Dakota testing the effectiveness of UASs for surveying and assessing infrastructure damage in disaster settings.

Following passage of Part 107, Edison Electric Institute and Sharper Shape, a California-based drone company that already flies BVLOS missions for utility asset inspections in Europe, applied for an FAA waiver to conduct BVLOS drone flights in the US utility sector. As 2017 gets underway and more waiver requests are granted, the number of utility BVLOS flights is set to rise.

While Part 107 marks a significant step toward the commercialization of drones, development of a robust regulatory framework is still very much a work in progress. Other FAA developments to watch that will affect utilities include those governing commercial use of drones to survey and monitor critical infrastructure as well as related rules restricting drone flights near critical infrastructure in order to contain security threats. The FAA is also establishing committees to address safety issues posed by UASs and to develop rules governing drone operations BVLOS, both of which will affect utility drone applications well into the future.

Are Drones About to Catch More Air Among Utilities?

Are Drones About to Catch More Air Among Utilities?