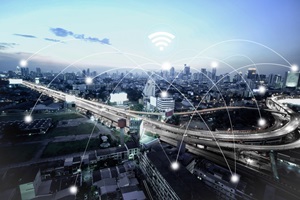 Thomas Chadwick is the 52-year-old CEO of GI Energy, a Chicago-based company of roughly 30 people. GI Energy is working to implement lessons learned from the entry of telecoms into the staid electric utility industry by creating new microgrid development business models. A recent big microgrid project win in San Francisco and a majority stake investment by a Shell Energy affiliate have put the small company on the map.

Chadwick’s most radical idea? The auctioning of specific service territories to microgrid developers within a regulated market environment. He believes this approach would scale up the microgrid industry at a rate similar to what happened with mobile phones. “The pace of adoption of mobile phone technology is something microgrid developers can only dream about today,” he said in a recent phone interview. Chadwick observed that the curve of acceptance of mobile phones over a 20-year period beginning in 1985 led to near universal market adoption. “Even a goat herder today in Tanzania also has a mobile phone,” he noted.

“What we had in the 1980s were sleepy incumbent utilities that had not changed much in at least 50 years,” said Chadwick, referring to then dominant landline phone utility providers. “What I see today is spookily similar in electricity markets.” The auctioning of licenses for different mobile phone frequencies directed capital markets to invest in the upgrading of telecommunications infrastructure. As a result, he detailed, money flowed to building new networks, manufacturing more advanced equipment, advanced software, and the operators themselves.

What enabled this regulated model to work, as opposed to the more competitive approach extolled by many microgrid participants, was that in exchange for exclusive franchises, market participants agreed to a new regulatory environment. Sound familiar? This was the basic tradeoff brokered by Samuel Insull more than 100 years ago in Chicago that gave rise to the utility monopolies microgrids are helping to dismantle today.

Yet, there is a key difference today: a centralized monopoly versus a distributed model, the Energy Cloud. “It’s all about the consumers and how to make new technology attractive to them,” Chadwick continued. While consumers paid a little above the going rate for fixed-line service in the beginning, ultimately the marginal cost differential for mobile phones dropped to zero. The idea of auctioning off portions of the existing utility service territories may scare electric utilities. Nonetheless, Chadwick notes that under the telecom model, these incumbents were also allowed to bid for frequencies.

While the chances of Chadwick’s proposal moving forward are questionable in the near term, his company is not standing still. GI Energy’s most impressive accomplishment to date might be its winning bid for a real estate redevelopment project sponsored by FivePoint Holdings at the Hunters Point shipyard in San Francisco. GI Energy offered a unique blend of solar PV, energy storage, wastewater treatment facilities, and utility-scale geothermal to win the eco-district project.

Though there is no natural gas in the mix on this project, GI Energy believes one of its key competitive advantages is the ability to provide long-term and transparent pricing on natural gas. Multinational oil & gas company Shell views natural gas as a bridging fuel to a renewable energy future. Shell Energy is also active in California’s community choice aggregation movement, which is waking up to microgrids.

This Hunters Point project, which will include approximately 10,500 new residences, represents a new trend in the commercial and industrial microgrid market: a focus on new real estate developments. I discussed this topic at the Realcomm conference in Las Vegas.

Transforming the Way We Live, Work, and Move with Wireless Power: Part 2

By Benjamin Freas
Industry Insight May 08, 2017

Transforming the Way We Live, Work, and Move with Wireless Power: Part 1

Transforming the Way We Live, Work, and Move with Wireless Power: Part 2

By Benjamin Freas
Industry Insight May 08, 2017

Transforming the Way We Live, Work, and Move with Wireless Power: Part 1