Distributed Generation in the US Set to Grow

This blog was coauthored by Jesse Broehl

Solar is certainly poised to dominate, but non-solar PV is set to contribute about 24% of future commercial distributed generation capacity, largely driven by increasing natural gas-fired combined heat and power.

Solar on the Rise and Small Wind on the Wane

The AEO report offers no insight on generation sources outside of solar PV for the residential sector, but the slow growth of distributed wind in the commercial sector is notable and in line with Guidehouse Insights’ expectations. Five to 10 years ago, the wind energy market was bifurcated with large commercial wind installations and a minor but healthy market of small and midsize wind turbines installed at residential and onsite commercial settings. Over the past few years, the wind power market has shifted in two starkly different directions with the commercial-scale multi-megawatt wind turbines and large wind plants growing at a steady pace while small and midsize wind plants face market declines.

The leading reason for solar outgrowing wind is that small distributed wind has not experienced the rapid cost declines that solar has experienced—by some measures, solar costs have declined 84% in the past 7 years (for additional information, learn more about comparative levelized cost of energy between technologies). Contributing to solar outpacing wind is that small and midsize wind is only cost-effective in very windy locations, and more homes and businesses are located in areas that have better solar resources than onsite wind resources. Lastly, markets in Europe and North America have seen reductions and eliminations of regulatory and financial incentives to support small and medium wind. 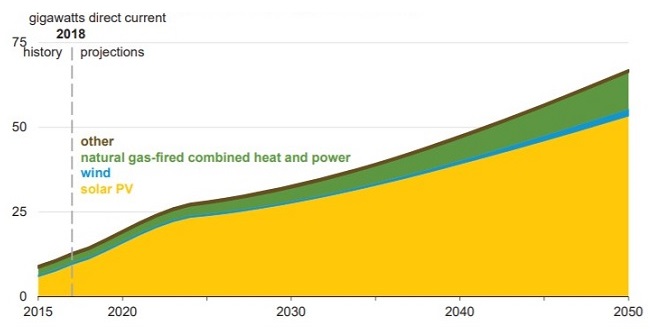 In addition to these benefits, distributed generation from renewables has the potential to reduce carbon emissions as the US commercial and residential sectors account for nearly 40% of energy consumption.

Who Will Win 800 MW of New York State Offshore Wind?

Who Will Win 800 MW of New York State Offshore Wind?