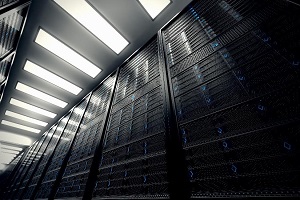 If something isn’t broken, why try to fix it? This kind of thinking sums up the perspective of many owners and operators of data centers. If they feel comfortable with the technology or solution that has been in place for quite some time, the incentive to enact something new and different is small. As a result, to maintain power for mission-critical loads, data centers have historically relied upon diesel generators linked to lead-acid batteries and (perhaps) dual feeds from two different utilities.

The Uptime Institute has created de facto data center industry standards that range from Tier I to Tier IV, with the latter representing the highest possible resilience. “Human beings have an almost emotional attachment to their diesel generators, as they give data center owners and operators both comfort and a form of insurance,” observed Chris Brown, CTO for the Uptime Institute. He does not see a decline in reliance upon diesel generators. According to Brown, “Engine generator usage will likely hang on, as the emotional tie and the form of insurance will still be present.”

Despite these insights, new data highlights how existing power infrastructure does carry risks for data centers. The average power outage cost for a data center in 2015 was $740,357—a 38% increase in the cost of downtime compared to 2010. Perhaps the most disturbing statistic found in Eaton’s Blackout Tracker Annual Report for 2016 is that the increase in maximum downtime costs rose to $2.4 million.

One analogy to the challenge facing data centers is military bases in the United States. A typical large-scale military base may feature from 100 to 350 backup diesel generators, each hardwired to a single building. In many instances, they are sized at more than 200% of each building’s peak load as a contingency for energy security. Just a simple networking of existing diesel generators into a microgrid can offer cost savings for military microgrids and data centers alike.

A study by Pew Charitable Trusts found, for example, that creating a microgrid instead of relying upon standalone backup diesel generators reduces the cost of resilience by $1 billion or more. Note that the savings vary by region, with the greatest savings for those military microgrids deployed in the PJM Interconnection transmission control area. Yet, when displacing diesel backup generators with 50% diesel/natural gas fuel hybrid microgrid, California military bases boast the largest net savings. With a 50/50 portfolio of diesel/natural gas, microgrids in the PJM territory and the Southeast ironically show an increase in cost on a dollar-per-kilowatt basis if compared to the current reliance upon diesel backup generators. This is largely a result of low diesel fuel prices in those parts of the country, and it arguably points to the need to diversify power generation sources with a microgrid beyond fossil fuels. 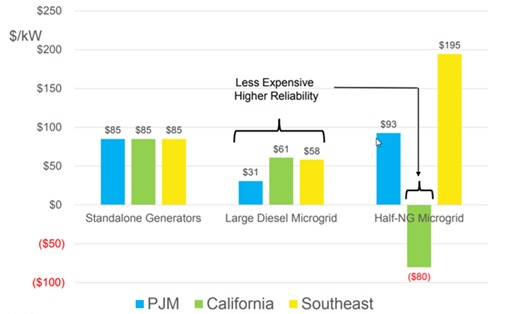 A new report by Guidehouse Insights, Military Microgrids, notes that a key to innovation lies in new business models. The same could also be said for data centers. Data centers like to control their own destiny, which often means they want to own infrastructure. Yet, just like solar leases and third-party power purchase agreements accelerated the solar PV industry at a critical point in time in its development path, similar models could also bring microgrids into the mainstream.

Does such an approach hold promise for state-of-the-art data center microgrids? Schneider Electric would like to find out. Learn more at the upcoming webinar on October 24.