The growth in the associated costs may simply be driven by an increase in economic wealth or growing human activities in hazard-prone areas rather than by changes in precipitation patterns due to climate change. Nevertheless, it has been found that global warming results in the intensifying of the hydrological cycle, meaning that climate change is likely to be an additional driver of these substantial costs.

Climate Change Has Significantly Changed the Characteristics of Floods

Based on an econometric analysis on precipitation patterns, climate change has led to significant changes in the characteristics of floods in Europe. Over the last decade, European countries, on average, experienced almost twice as many floods per year than during the 1980s. While Central and Northern Europe saw the largest increase in the annual number of floods, Eastern Europe suffered from significantly longer periods of flooding. Proof of intensifying precipitation was found in Central Europe. There, the highest 5-day precipitation amount, on average, was augmented by around 50 mm. This increase corresponds to a rise in the proportional change of 46.8%.

Annual Occurrence of All Floods in Europe 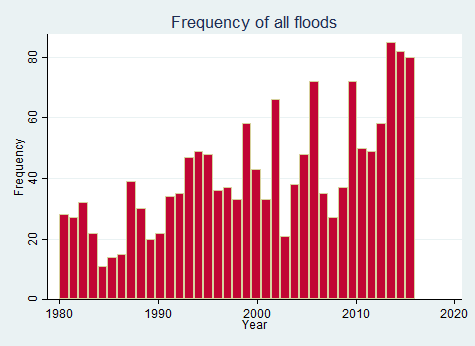 (Sources: Guidehouse, Inc. and Munich Re)

The changed precipitation patterns have severe consequences not only for private households, but also for businesses, the financial sector, and the global economy, as the changing flood characteristics are major drivers of the absolute amount of direct flood losses. Using a panel regression model that decomposes the amount of flood losses into the effects of precipitation patterns, and controlling for a wealth effect and an urbanization effect, it is found that an increase of 10% in either the annual frequency, average duration, or absolute precipitation amount leads to 7%-17% higher losses on average. For instance, if the annual frequency of floods in a country doubles, as it did between 1980 and 2014, the direct economic costs almost triple on average. This has substantial consequences, as in the current decade the annual economic costs from flooding in Europe already amount to about €6 billion ($6.8 million).

Climate change is a major determining factor of economic losses. It is necessary to actively take measures to prevent the rapidly progressing climate change and to help countries adapt to the changing precipitation pattern.

By Rafael Go
Back to Top
Press enter to search